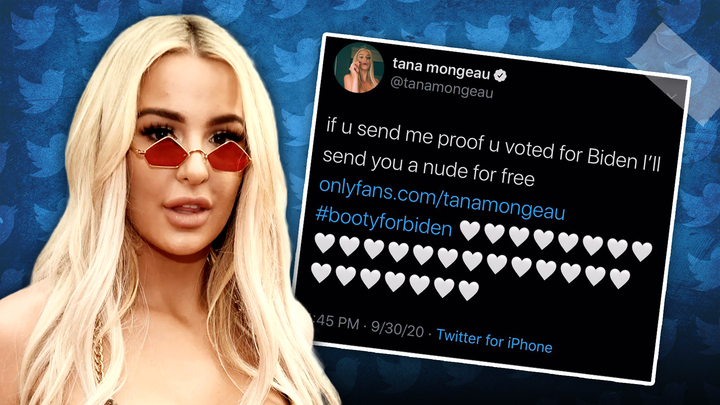 YouTuber Tana Mongeau promised to send nudes to Joe Biden supporters on Wednesday as part of her “Booty for Biden” campaign, which has now raised legal concerns.

Mongeau advertised the strategy in a Tweet, writing: “if you send me proof u voted for Biden I’ll send you a nude for free.”

That post, of course, was accompanied by a link to her OnlyFans page and the hashtag #bootyforbiden. However, the problem is that people said she was breaking the law and asking her fans to do the same.

Some say what she did could be considered vote buying, which is a felony punishable by a fine and up to two years behind bars. Because she was asking fans for proof of their vote, others said she was also encouraging ballot selfies, which are illegal in several states.

Mongeau eventually clarified what she meant by proof, saying, “I just meant tell me.”

She then ended up deleting her initial offer altogether, following up with, “in all seriousness if you can vote please do… not voting is voting and the world is scary.”

It’s unclear what the response to her post was like on her end, but she did later claim that her campaign “broke Tana Uncensored,” in an Instagram post that featured a NSFW photo of her with the Democratic candidates face photoshopped over hers.

“Tana Uncensored messages are broken, and the point has been made: I got tens of thousands of messages of people telling me that they willingly voted for Joe Biden,” Mongeau added in an Instagram Story.

“It’s the best thing ever. You don’t need my ass to make you go vote. So go vote because you wanna see a change in this country just like me, and thank you to everyone who joined me today. Booty for Biden.”

For now, it seems like the YouTuber is trying to join the list of stars encouraging their fans to vote, but the way she’s been doing it might be a problem.

Reports surfaced this weekend pointing out that Mongeau has just lost her YouTube verification check. As of now, there’s no confirmed reason, evidence, or explanation for this, but some internet users and media outlets are suggesting it could have to do with the controversy.

Neither Mongeau nor the platform has commented on the verification change so it’s tough to say if they are connected.

Meanwhile, fans online are offering up other explanations, saying it could be because she changed her name back from Tana Paul to Tana Mongeau.

It’s because she changed her name to Tana Paul and back to Tana Mongeau. I’m pretty sure it hasn’t been verified since she changed it.

See what others are saying: (TMZ) (Cosmopolitan) (Daily Dot)