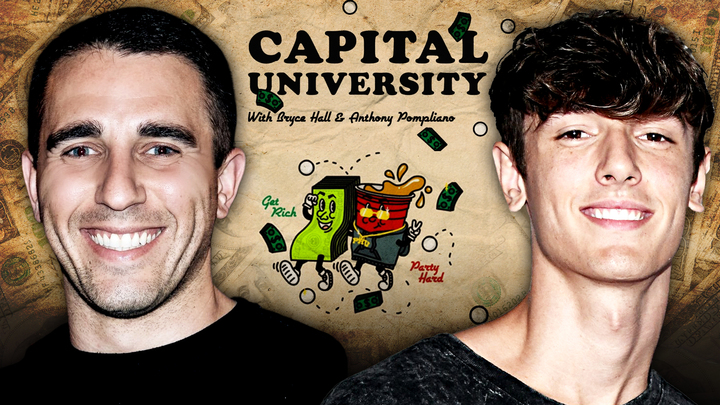 TikTok star and Sway House member Bryce Hall officially launched a finance podcast Tuesday where he and his fans will learn about money management.

The 21-year-old’s podcast is called “Capital University,” and he’s joined by co-host Anthony “Pomp” Pompliano, an entrepreneur and investor who has worked for companies like Facebook and Snapchat before getting into venture capital.

Pompliano is supposed to serve as a sort of mentor figure, teaching Hall and listeners about building generational wealth, the basics of investing, and other tips for ensuring financial security.

Inspiration Behind the Podcast

However, Hall will also use the podcast to talk about his personal experience with fame and wealth at a young age. He told PEOPLE magazine that the idea for the podcast stemmed from mistakes he made earlier in his career.

″I always thought money was an object,″ Hall said. ″I was spending money before I even had it.″

He also talked about going ″completely broke″ and getting hit with taxes. All of this made him realize the importance of money management, which he though his fans might also want to know about.

On top of that, in the first episode of the podcast, Hall talked about his four-month-old merch brand, Party Animal, saying it clocked in more than $1 million in its first quarter.

Criticism of Other Influencers

With this new interest in learning about finance and business, the public could be seeing a lot more from Hall soon.

At the same time though, he also caught some attention for calling out the spending habits of another TikTok star, Thoman Petrou. He’s the co-founder of the Hype House, and Hall claims that Petrou, like other influencers, is taking a shorter-term approach in his career by relying on YouTube ad revenue and TikTok brand deals.

In fact, Hall estimated that Petrou makes about $150,000 a month but says he overspends on lavish items.

“He, along with many other influencers, like to really prove that they’re making a shit ton of money,” he said in the first episode of the podcast.

“They don’t understand that social media, this poppin’ time that they’re in, isn’t going to last forever, and right now, when you’re at the top, this is when you’re going to be making the most money. You just got to find a way to sustain it.”

For now, it will be interesting to see the reactions to this venture, and Hall’s new interest in finance has some wondering if it could change people’s perception of him. Hall earned himself a bad reputation for repeatedly throwing massive parties during the ongoing coronavirus pandemic.

Still, some compare his success to that of YouTube Jake Paul, who is also recognized as a businessman and entrepreneur but has continued to embroil himself in controversies.

See what others are saying: (PEOPLE) (Tubefilter)