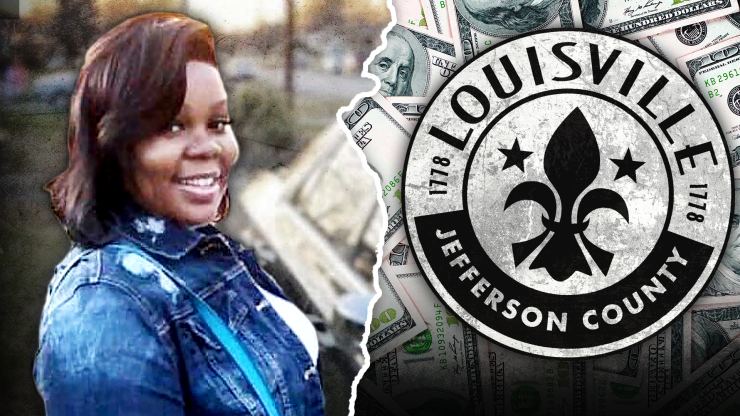 Lawyers for the family of Breonna Taylor confirmed Tuesday that the City of Louisville had reached a historic $12 million settlement in a wrongful death suit brought by Taylor’s family.

Taylor was the 26-year-old woman who was shot and killed in her apartment by police serving a warrant earlier this year. The incident occurred just after midnight on March 13 when three Louisville Metro Police officers entered her apartment by force with a battering ram and fired multiple rounds. Taylor’s boyfriend, Kenneth Walker, said they were in bed when they heard someone pounding on their door.

Walker claimed both he and Taylor repeatedly asked who was at the door, but the police failed to announce themselves. Believing the police to be an intruder, Walker fired, striking one of the officers in the leg. Police responded by firing several shots, hitting Taylor five times. One of the officers, Detective Brett Hankison, fired 10 shots blindly into the room.

The warrant officers were serving pertained to a narcotics investigation that involved two men who police believed were selling drugs out of a house 10 miles away. A judge had signed a warrant allowing officers to search Taylor’s apartment because police said they believed one of the men — who was an ex-boyfriend of hers — was using her apartment to receive packages.

Neither Taylor nor Walker had any prior drug arrests or convictions, and no drugs were found in the apartment.

While it was initially reported that police had a no-knock warrant — meaning they did not have to knock or announce themselves before entering — officials have since said that the orders were changed before the raid to “knock and announce,” which means police were in fact required to identify themselves.

Notably, police have said they knocked several times and announced themselves as officers with a warrant before they broke down the door, but their account has been heavily disputed. Taylor’s family, Walker, and multiple neighbors have all said police did not say who they were or that they were serving a warrant.

Many others have also pointed to the fact that the police’s incident report had multiple errors. For instance, it listed Breonna’s injuries as “none” despite the fact that she was killed after being shot five times. It also claimed that officers did not force their way into the apartment, even though they used a battering ram.

The $12 million settlement for that suit was announced by Louisville Mayor Greg Fischer in a joint press conference with Taylor’s family and their lawyers on Tuesday. It is by far the largest amount ever paid by Louisville police in a police misconduct suit.

In addition to that historic payment Mayor Fischer also announced that the city was enacting a number of police reforms as part of the settlement.

Among other measures, those reforms included:

While both the settlement and the reforms were applauded by Taylor’s family and their lawyers, they also emphasized that these are just the first step.

Currently, none of the officers involved are facing criminal charges, but investigations by both the Kentucky attorney general and the Federal Bureau of Investigations are underway.

Two of the officers, Sergeant Jonathan Mattingly and Officer Myles Cosgrove, have been placed on administrative leave, and Detective Hankinson was fired in June. Hankison has reportedly appealed his firing, but the case was delayed until the criminal investigation is complete.

City officials have also made some changes, including banning no-knock warrants, as well as requiring all officers serving warrants to wear body cameras and other changes to the police department aimed at ensuring accountability and transparency.

However, many have called for more to be done, including Taylor’s family, who for months have been pushing for criminal charges against the officers.

“As significant as today is, it’s only the beginning of getting full justice for Breonna,” Taylor’s mother, Tamika Palmer said during Tuesday’s briefing.

“And with that being said, it’s time to move forward with the criminal charges because she deserves that and much more. Her beautiful spirit and personality is working with all of us on the ground, so please continue to say her name.”

Crump also echoed that sentiment, calling for the officers to be charged “immediately.”

According to reports, a grand jury may hear the criminal case as soon as this week.

See what others are saying: (The New York Times) (The Associated Press) (The Louisville Courier-Journal)

South Dakota Attorney General Said He Thought He Hit a Deer With His Car. He Actually Killed a Pedestrian