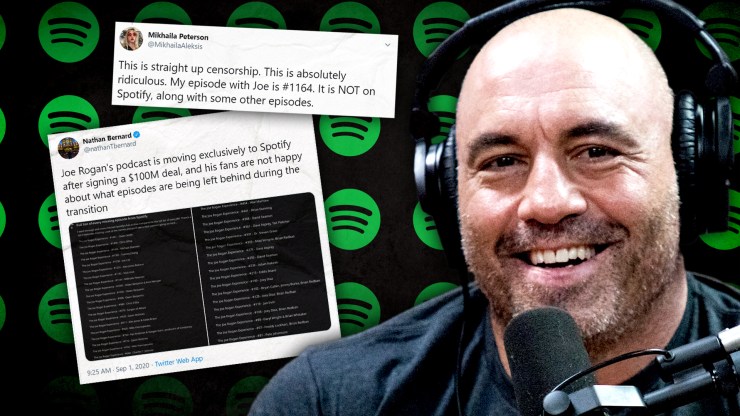 Rogan’s podcast, “The Joe Rogan Experience,” finally debuted on Spotify earlier that day as part of his exclusive deal with the platform– a deal worth more than $100 million. However, the debut was met with a ton of frustration after fans noticed that dozens of episodes were missing from his podcast catalog.

This was a bit confusing since Rogan had previously said his entire library of podcasts would be available starting September 1 before becoming fully exclusive to Spotify by the end of the year.

Several news outlets and listeners claimed that the missing episodes seemed to be some of his most controversial interviews with far-right figures like Jones, Milo Yiannopoulos, Gavin McInnes, and others.

Other excluded episodes featured non-political figures like comedian Chris D’Elia, who was recently accused of sexual misconduct involving minors, as well as comedian and podcast regular Joey Diaz, who came under fire when comments from an old podcast surfaced about him coercing female comics into performing oral sex.

After noticing who was missing, many began calling it censorship, wondering if it was Spotify’s choice or Rogan’s. For example, Mikhaila Peterson, daughter of controversial professor Jordan Peterson, tweeted about her episode’s exclusion, saying: “This is straight up censorship. This is absolutely ridiculous.”

She and several others began sharing lists of all the guests who were left out, which seemed to align with this theory about censoring controversial voices. However, she did note that it was the first day the podcasts were available, leaving some room for an explanation.

The censorship claims are a huge point of frustration for people because Rogan is known for talking to people from across the political spectrum. When he first announced his deal, he even noted that his show wouldn’t change.

“It’s just a licensing deal, so Spotify won’t have any creative control over the show. They want me to just continue doing it the way I’m doing it right now,” he said.

“We’re going to be working with the same crew doing the exact same show,” he continued in his announcement video.

These missing episodes had people worried about the show’s future, but others hesitated to call it censorship after finding a couple excluded guests confusing and not in line with the censorship narrative. For instance, missing episodes also included those of actor Tommy Chong, who is also a prominent cannabis rights activist, as well as comedian Nick Kroll.

Later in the day, Peterson updated her Twitter thread to say, “Alex Jones says these episodes will be uploaded at a later date and it is not censorship.”

Jones posted a video on his InfoWar’s site offering an explanation after speaking with Rogan. “They’ve got 1500+ files and then some migrating over, and they’ve had a few problems here and there with corrupted files, with the naming of them. And Spotify wants to have a first rollout and then a second rollout,” he said.

“Here’s the key. Joe Rogan’s favorite 100 episodes of the last 10 years or so will be left on YouTube starting December 31 when he goes exclusively to Spotify. For this couple months no man’s land the content will be on both platforms and will be migrating over.”

“And so that’s why the Alex Jones interview is not there. That’s why some of the other interviews aren’t there. Because those are going to be the exclusive interviews that are left on YouTube where, in Joe’s words, they’ll probably get more views than if they were on Spotify.”

Jones also added that he asked Rogan point-blank if Spotify was censoring him and he said, “Absolutely not.” He said Rogan explained that episodes were being organized and migrated over, but that Jones and other guests will on be on the podcast in the near future.

Peterson also later noted that her episode now appears on Spotify. It seems like a few others are as well, including episodes with Joey Diaz and Tommy Chong.

UPDATE 2: and we’re back!! Phew! @Spotify is off the hook and @joerogan is still awesome. See you folks next time for the next conspiracy theory! 🙃 pic.twitter.com/jIFghfGrEi

See what others are saying: (Entertainment Weekly) (Mic) (Digg)