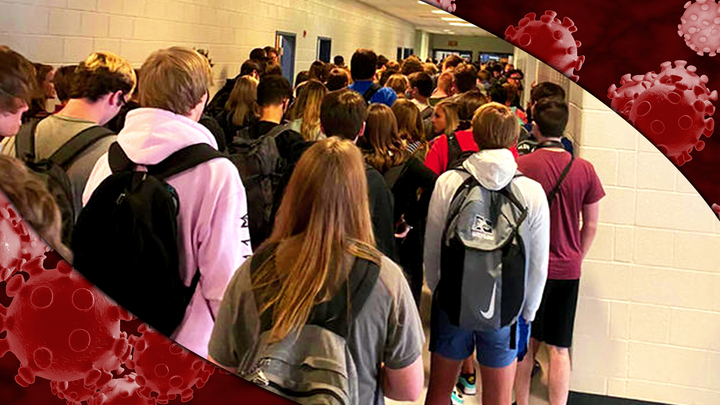 Six students and three staff members at North Paulding High School have tested positive for the coronavirus one week after viral photos showed students crowding in the hallways, many without face masks.

Superintendent Brian Otott wrote a letter to parents at the school confirming that there would be no in-person learning on Monday or Tuesday as the school waits for more test results to come back and for the building to undergo a deep clean. Families will learn whether or not there are plans to resume in-person instruction on Tuesday night.

“Please know that according to guidelines established by the school district, any students and staff who are confirmed cases of COVID-19, along with any identified close contacts, must quarantine for at least 14 days and cannot return to school until they have completed all the requirements of the DPH’s guidance for persons infected with COVID-19,” Otott continued in the letter. Right now, it is unclear exactly how many people will be required to do the 14-day quarantine.

Angie Franks, the aunt of two students who tested positive at the school, told the Atlanta Constitution-Journal her nephews did not grasp the gravity of the virus and were not encouraged to wear masks. Paulding County leaders have previously stated they did not believe in enforcing a mask mandate.

“They sat in class all day long with no masks and not social distancing,” Franks said. “And I have no idea how many kids they came into contact with.”

The viral photo that showed students jammed in a hallway spread across the internet like wildfire. It resulted in the school announcing that anyone who shared photos or criticisms of the school could face disciplinary action. On Thursday, two students who initially shared the photos ended up being suspended, though those suspensions were eventually lifted.

“I took [the picture] out of mostly concern and nervousness after seeing the first days of school,” Hannah Watters, one of the suspended students, told CNN.

“I’d like to say this is some good and necessary trouble, so I don’t regret posting this because it needed to be said,” she added.

Her suspension, which was set for five days, ended Friday when the school called to tell her it was reversed and that her record would not reflect it.

The Paulding County Board of Education tweeted a statement confirming that the other student’s suspension had been lifted as well.

This comes as the issue of reopening schools has sparked national debate. While many initially believed that kids are less likely to contract and spread the virus, recent reports indicate this may not be universally true. A new report from the American Academy of Pediatrics and the Children’s Hospital Association says that cases in children in the United States could be on the rise.

As of the end of July, 338,982 kids in the country had tested positive, totaling 8.8% of all COVID-19 cases. The report then noted that in the last two weeks of July, over 97,000 children tested positive for the virus, which is a 40% increase in child cases.

This figure could be even higher, because the report relied on data reported by states, and Texas only reported age distribution in 8% of cases, while New York did not report it outside of New York City. Different states also used different definitions of children.

While most states set the cutoff between 17 and 19-years-old, some states set it as young as 14. Florida, which is one of the country’s case leaders, was among those states. Other outliers included Alabama, which set their cutoff at 24, and was excluded from some figures in the report.

According to the Center for Disease Control and Prevention, this also has a much larger impact on non-white children. An August report noted that Latino and Black children were hospitalized at much higher rates than white children.

See what others are saying: (Washington Post) (CNN) (CBS 46 Atlanta)