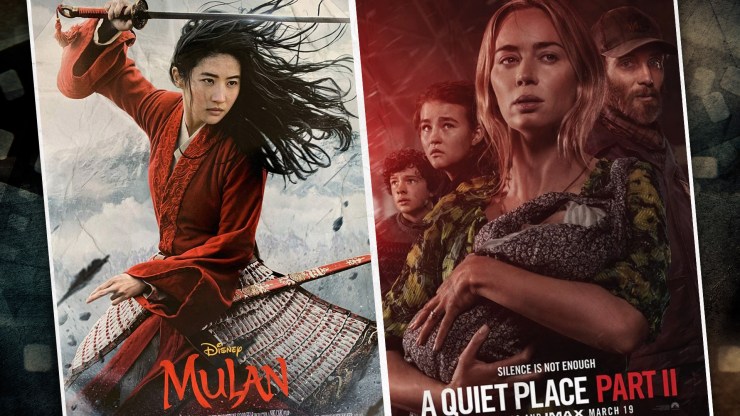 If the summer box office wasn’t already dead on arrival, it certainly is now. Both Disney and Paramount have shuffled their release schedules, tossing some pictures miles down the road, and blockbusters like “Mulan” into the complete unknown.

The postponement of “Mulan” is the biggest blow to movie theaters right now. Previously slated to hit screens on August 21, it now has no release date, as Disney does not want to keep assigning dates to films it knows may likely need to be pushed again. This comes just a few days after Warner Brothers also decided to delay “Tenet” indefinitely. The two films would have been the first big blockbusters for audiences to see once theaters opened back up after closing because of the pandemic.

“Over the last few months, it’s become clear that nothing can be set in stone when it comes to how we release films during this global health crisis, and today that means pausing our release plans for ‘Mulan’ as we assess how we can most effectively bring this film to audiences around the world,” a Disney spokesperson told Deadline.

Wes Anderson’s “The French Dispatch,” which was going to be a fall release, has also been pushed back to an unknown date. Disney has also opted to further delay major franchises, including its upcoming “Avatar” and “Star Wars” movies each by a year. Now, new “Avatar” sequels will be released in December every other year between 2022 and 2028. The new “Star Wars” films will hit screens in those off-years.

Other delayed Disney projects include “The Personal History of David Copperfield,” which will now come out on August 28; “Death on the Nile,” which will hit theaters on October 23; “Black Widow,” which releases on November 6, “Antlers,” which will debut on February 19, 2021; “The Last Duel,” which will arrive October 15, 2021; and an untitled live action movie will be coming out on December 16, 2021.

Disney is not the only studio making major changes to their release schedule. Paramount also shook up their calendar, moving “A Quiet Place II” from this September to April 23, 2021. “Top Gun: Maverick” is also getting bumped to next year, with a release date set for July 2, 2021 as opposed to this Christmas.

Paramount additionally announced that a new “Jackass” movie is getting pushed to September 2021 while “Sonic the Hedgehog 2” is moving to April 2022. “The Tiger’s Apprentice” is getting delayed a full year, going from February 11, 2022 to February 10, 2023.

“We truly believe that there is no movie-viewing experience like the one enjoyed in theatres,” Paramount’s president of domestic distribution Chris Aronson, and president of international theatrical distribution Mark Viane told Variety. “We are committed to the theatrical experience and our exhibition partners, and want to stress that we are confident that, when the time comes, audiences everywhere will once again enjoy the singular joy of seeing Paramount films on the big screen.”

Sony joined Disney and Paramount in these schedule shifts by nudging the latest Tom Holland-led “Spider-Man” movie by one month to December 2021.

These hold ups come as movie theaters are suffering from mass pandemic closures. Major chains have announced their plans to reopen, but have been forced to change them. On Thursday, AMC, the largest chain in the United States, delayed its opening for a third time.

AMC now plans to open its doors in “mid to late August” instead of in July. When they made this announcement, “Mulan” was expected to be released in August. Now that its release is unclear, AMC may be forced to push their reopening once more. Right now, there would be little new content for theatergoers to see in August.

New York and Los Angeles, the biggest movie markets in the country, also have yet to announce their intent to reopen theaters. While New York is walking through its phases of reopening, Los Angeles is facing the potential of a second lockdown. This could further jeopardize the movie theater industry.

See what others are saying: (Deadline) (Variety) (Wall Street Journal)

Michael B. Jordan Launches Initiative to Increase Diversity in Hollywood