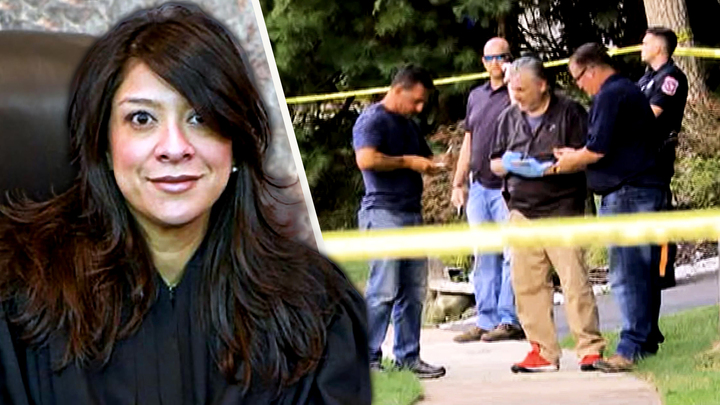 After the son of a federal judge in New Jersey was shot and killed Sunday, authorities believe they may have identified a suspect in the shooting, who was also found dead.

A gunman appeared at U.S. District Judge Esther Salas’ house in North Brunswick, allegedly dressed as a FedEx delivery person. Salas’ 20-year-old son, Daniel, opened the door with his father, Mark Anderl behind him. The gunman then shot both of them, killing Daniel and injuring Mark. He fled the scene and the Newark division of the FBI said a search was underway Sunday evening.

On Monday morning, officials said a potential suspect tied to the case was found dead. According to NBC News in New York, officials found that an attorney believed to be the shooter in the case had died of a self-inflicted gun wound in the Catskills. Authorities are investigating whether or not a package addressed to Judge Salas is tied to this attorney.

That attorney was later identified as Roy Den Hollander, a self-described anti-feminist. He brought a case before Judge Salas in 2015.

Salas was appointed by President Barack Obama in 2010 and was confirmed in 2011, making her New Jersey’s first Hispanic woman to serve as a U.S. District Judge. Since serving in this role, she has handled several high-profile cases, including one involving Real Housewives of New Jersey star Teresa Giudice and her husband Joe. She sentenced them both to staggered sentences on fraud charges.

She also handled cases involving members of the Grape Street Crips, which were in connection to a long-running drug trafficking network. In 2016 she sentenced a leader of the Grape Street Crips to 14 years in prison. She also sentenced a leader of the South Side Cartel, which has been described as one of the most violent gangs in Newark, to 45 years in prison.

Just last week, she was assigned to a lawsuit filed against Deutsche Bank by numerous investors. The lawsuit alleges that the bank “made materially false and misleading statements regarding the Bank’s business, operational and compliance policies.”

It also claims that the bank failed to properly monitor high risk customers, including Jeffrey Epstein.

“As a judge, she had threats from time to time, but everyone is saying that recently there had not been any,” North Brunswick Mayor Francis “Mac” Womack told ABC.

Leaders in New Jersey responded to the news by sending condolences to Salas and her family. Governor Phil Murphy called the shooting a “senseless act.”

New Jersey Senator Bob Menendez said he hopes those responsible for this are “swiftly apprehended and brought to justice.”

Update: This article was edited to include updated information about the suspect’s identity.