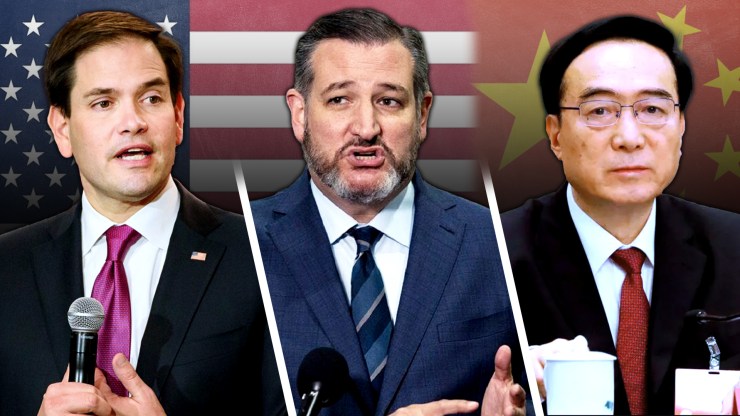 Senators Marco Rubio (R-FL) and Ted Cruz (R-TX) were sanctioned by China on Monday over their involvement in criticizing the nation’s actions in Xinjiang. Two other American officials faced sanctions as well for interfering in “China’s internal affairs,” as characterized by the Chinese Foreign Ministry.

The Chinese sanctions were in retaliation over earlier sanctions the U.S. placed on Chinese officials last Thursday. The U.S. was able to do this following the passage of the Uighur Human Rights Policy Act last month. That law allows the U.S. to place sanctions, in line with the Global Magnitsky Act, on officials who are involved in the ongoing repression of ethnic minorities in Xinjiang.

When the law was passed in mid-June, China warned that if the U.S. actually imposed any sanctions they would do the same in retaliation. after Thursday’s announcement, the Chinese Foreign Ministry stated, “We urge the US to immediately rescind its wrong decision and stop making any remarks or moves that interfere in China’s internal affairs and undermine China’s interests. The Chinese side will firmly fight back if the US obstinately pursues such agenda.”

Despite China’s threat, the U.S. imposed sanctions on certain Chinese officials and organizations involved in Xinjiang on July 9. The sanctions include freezing the assets these officials hold in the U.S., as well as restricting the ability of the officials and their immediate family members’ to enter the U.S.

In a statement on July 9, Secretary of State Mike Pompeo wrote, “The United States will not stand idly by as the CCP carries out human rights abuses targeting Uyghurs, ethnic Kazakhs, and members of other minority groups in Xinjiang, to include forced labor, arbitrary mass detention, and forced population control, and attempts to erase their culture and Muslim faith.”

Out of the four named individuals in the sanctions, one stands out: Chen Quanguo. Chen is the Communist Party secretary for Xinjiang and part of the Politburo and the highest-ranking Chinese official to ever be sanctioned under the Global Magnitsky Act. He first received infamy for his actions while doing the same job in Tibet from 2011-2016.

The Treasury Department named three other individuals who would have their assets frozen for helping Chen set up the surveillance and detention families in Xinjiang.

Additionally, the Xinjiang Public Security Bureau (XPSB) was also sanctioned by the Treasury Department, and the State Department added that officials who worked with the XPSB were also liable to have themselves and their families denied entry into the U.S.

When speaking about the sanctions, Treasury Secretary Steve Mnuchin said, “The United States is committed to using the full breadth of its financial powers to hold human rights abusers accountable in Xinjiang and across the world.”

However, these sanctions will likely end up being largely symbolic because these officials don’t travel to the U.S. in the first place. It’s also believed that their assets aren’t based in America but in China.

Even as a symbolic act, it still made China upset. On Monday, the country imposed its own sanctions against the four U.S. officials in retaliation, including the aforementioned Senators Cruz and Rubio.

Cruz was likely placed on this list for his work as part of the U.S. Congressional-Executive Commission on China. Two other officials part of that committee were also named, including Rep. Chris Smith (R-NJ), and Sam Brownback, a lawyer who also serves as the US Ambassador at Large for International Religious Freedom.,

Rubio was likely named over his co-sponsorship of the Uighur Human Rights Policy Act. Interestingly though, China avoided issuing sanctions on the other co-sponsor, Sen. Robert Menedez (D-NJ).

As far as what these sanctions will actually do, that’s a little unclear. So far, China hasn’t given any specifics as to what the penalties would be.

These recent sanctions are just the next step in ongoing tit-for-tats between the two countries. There’s an ongoing trade war, tensions over how Hong Kong is being treated by the mainland Chinese, issues over the sovereignty of the South China Sea, and major problems with how the Chinese are treating ethnic minorities in the Xinjiang region.

The problems in Xinjiang are so bad, that there are pundits and experts calling it a cultural genocide.

Even outside of the US, China has increasingly been pressured to change course over Xinjiang and Hong Kong.

See what others are saying: (NBC News) (Al Jazeera) (NPR)