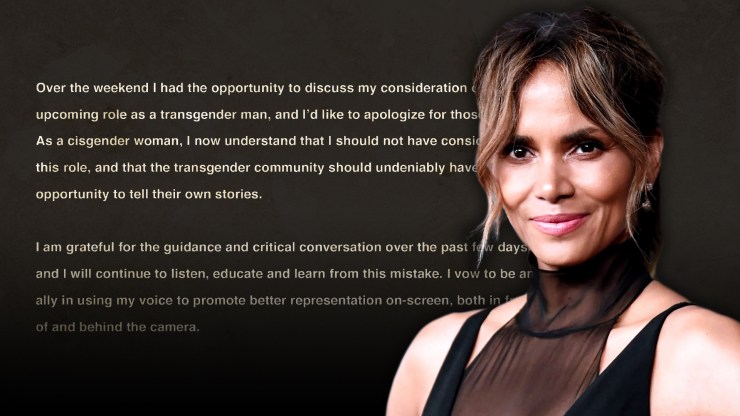 After a weekend of backlash, education, and conversations about transgender representation, actor Halle Berry announced Monday that she is no longer considering plans to play a transgender character.

The backlash against Berry first appeared Friday after she took part in an Instagram live interview with hairstylist Christin Brown. In that stream, Berry talked about possibly cutting her hair short again for a potential new film project, saying, “I’m thinking of playing a character where the woman is a trans character, so my hair is gonna have to be – she’s a woman that transitioned into a man, so my hair is going to be really shaved.”

“This world, who this woman was is so interesting to me, and that will probably be my next acting role.”

“It’s really important to me to tell stories, and that’s a woman, that’s a female story actually– it changes to a man, but I want to understand the why and how of that,” she added.

When people caught wind of this interview, people took issue with her remarks and the idea that a cisgender woman would be taking on such a role.

This isn’t exactly a new point of debate. For instance, Scarlett Johansson came under similar scrutiny in the past when she initially accepting the role of a transgender man for the film “Rub & Tug,” which she later walked away from after backlash.

However, in Berry’s case, people were also upset by her lack of knowledge about the transgender community, noting that she repeatedly misgendered the character by using “she/her pronouns.”

Still, while some people responded with anger, a lot of people took the approach of asking her to educate herself on trans issues and reconsider taking that role. Many actually asked her to watch Netflix’s new documentary “Disclosure,” which is executive produced by Laverne Cox. That film takes an in-depth look at Hollywood’s depiction of transgender people to help understand the real-world implications they have on the trans community.

On Monday, the official Twitter account for the documentary even shared a clip from the project, writing, “Today is a good day to remind people that casting trans actors in trans roles is more than about opportunity.”

Then it directly addressed Berry in another post, asking her to watch the film “to understand how cis actors like yourself acting in trans roles has major cultural consequences offscreen.”

By Monday evening, Berry responded with a statement posted to her social media pages apologizing for her remarks and adding, “As a cisgender woman, I now understand that I should not have considered this role, and that the transgender community should undeniably have the opportunity to tell their own stories.”

She explained that she was grateful for the guidance and critical conversations that have taken place over the last few days, adding. “I will continue to listen, educate and learn from this mistake. I vow to be an ally in using my voice to promote better representation on-screen, both in front of and behind the camera.”

Berry’s statement was received very well, with a lot of people thanking her for being willing to engage in dialogue with others and responding with a statement so quickly.

Similar sentiments came from the documentary’s account, which thanked her for listening and learning.

GLAAD also tweeted at Berry, saying it was pleased that she had listened to the concerns of transgender people, adding, “Other powerful people should do the same.”

Still, Berry has faced some criticism from those angry with her for apologizing, as some believe there should more flexibility in Hollywood about who can play what roles. Conservative commentator Ben Shapiro for instance called her statement “performative wokeness.”

But that is a point the film’s Twitter account hit on Monday when it first addressed Berry’s initial comments. At the time, the account tweeted, “In preemptive response to the critique that all artists should be able to play any role.@Lavernecox “I think if all things were equal, then [yes]. But all things are not equal.”

See what others are saying: (The Guardian) (Insider) (Vanity Fair)

Lady A, Formerly Lady Antebellum, Sues Black Blues Singer Lady A Over Rights to Use Name