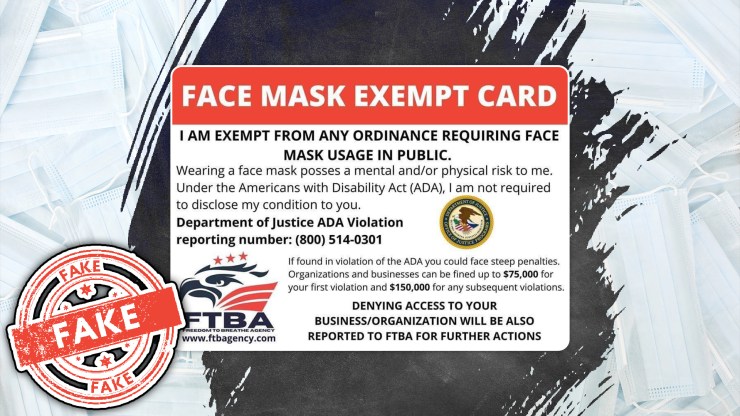 The Department of Justice confirmed on Wednesday that a card claiming to exempt someone from wearing a face mask in public was not backed back the government, despite claims to the contrary.

Photos of a small ID shaped card are swirling around social media that state the card bearer is “exempt from any ordinance requiring face mask usage in public.” It goes on to detail that wearing a mask “posses a mental and/or physical risk to me.”

As far as why the bearer is exempt, it claims, “under the Americans with Disability Act (ADA), I am not required to disclose my condition to you.”

The card goes on to detail that violating the ADA could result in penalties of up to $75,000 for a first violation, and upwards of $150,000 for subsequent violations. It also features the seal of the Department of Justice, indicating that the government agency endorses the card. The cards ends with the line, “DENYING ACCESS TO YOUR BUSINESS/ORGANIZATION WILL BE ALSO REPORTED TO FTBA FOR FURTHER ACTIONS.”

To make it clear, the card carries no authority and is fake. A few standout red-flags are the fact that it gets the name of the ADA wrong; it’s the “Americans with Disabilities Act”, not “Disability.” Additionally, it spells “poses” as “posses,” although there have been updated versions of the card that fix these issues.

Another feature that indicates it’s not a card issued by the government is the mention of the FTBA, which stands for the Freedom to Breathe Agency; a distinctly non-governmental organization. The associated website listed, www.ftbagency.com, doesn’t actually work.

These fake exemption documents are not exactly new. In fact, these cards are actually just the latest version making rounds on sites like Facebook, and the tactic has been around since municipalities first issued face-coverings ordinances in order to combat COVID-19.

While people have printed out the cards, they carry no authority, and the Department of Justice even issued a statement to clarify this after the FTBA card went viral.

Does the ADA Still Apply?

For some, questions still may remain regarding whether or not portions of the card are correct, such as the implication that a business can’t deny service to someone refusing to wear a face mask due to a medical condition.

According to the ADA National Network, which is a network funded by the US Department of Education and the National Institute on Disability and Rehabilitation Research, the ADA does protect people with disabilities from being denied “public accommodations.” Most businesses fall into that category, though, there are exceptions that would apply during the coronavirus pandemic.

The organization writes states on its website, “The ADA expressly provides that a public accommodation may exclude an individual if that individual poses a direct threat to the health or safety of others that cannot be mitigated by appropriate modifications in the public accommodation’s policies or procedures or by the provision of auxiliary aids.”

Not wearing a mask greatly increases the chances that a carrier of COVID-19 could spread the virus and pose a serious risk to public health, especially if the carrier is still in the virus’ incubation period, when symptoms might not be clearly present.

See what others are saying: (Today) (Daily Dot) (CNN)

Elijah McClain’s Death to Be Investigated Nearly a Year Later. Here’s What You Need to Know