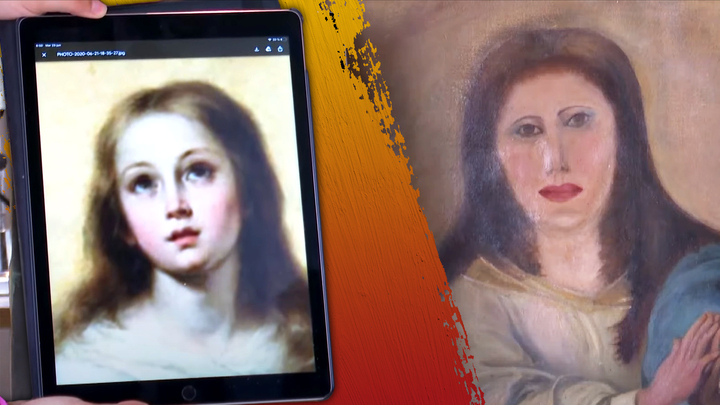 Conservation experts in Spain are calling for better regulation over restoration projects after an art collector had a copy of a famous painting ruined by an amateur restorer.

The destroyed artwork was a historical copy of La Inmaculada Concepción del Escorial , which depicted the Virgin Mary and her lack of Original Sin, according to Catholic dogma.

The unnamed collector paid €1,200 to a local furniture restorer to fix the painting. He told El Pais that the man had fixed plenty of historical furniture for his family, so he trusted his work. Fortunately, the collector’s painting wasn’t the original, but an early 20th-century copy of baroque artist Bartolome’s Esteban Murillo’s 17th Century piece. The original is currently housed at El Prado, one of the world’s most prestigious art museums.

The collector also told El Pais that the piece was actually ruined twice by the furniture restorer. According to an interview with the outlet, the first attempt at a restoration featured a “completely disfigured face,” although both attempts are far cries of Murillo’s work.

However, this isn’t the first time a story about a botched-attempt at restoring historical artwork has come out of Spain.

In 2012 Ecce Homo, a fresco of Jesus Christ in a small Borja church was destroyed when an elderly parishioner attempted to fix the deteriorating piece. She claims the priest gave her permission to fix the fresco.

For many, it ended up looking like a monkey, and received the nick-name Ecce Mono – a mix of Spanish and Latin that means “Behold the Monkey,” a play on the piece’s original name which means “Behold the Man.” However, in a twist, the ruined fresco helped drive tourism to Borja, which was facing economic hardships and proved to be a huge boon.

In 2018, a statue in northern Spain of St. George slaying the Dragon was heavily altered after a local artist tried to restore the piece. The colors were so bold, solid, and vibrant that it drew comparisons to playmobil figures. After hundreds of hours of work across a year, professional restorers managed to make it appear much closer to its pre-2018 likeness.

The latest fiasco involving La Inmaculada Concepción del Escorial has caused professionals in the industry to call for regulation over historical art restoration. In a memo released on June 23rd, the  Spanish Association of Conservators and Restorers (ACRE) said:

“If the facts are confirmed, we will have to lament the loss, again, of a cultural icon… and we ask that in this situation isn’t used as a joke by the media or social media, as has happened in the past… It’s sad that in the 21st century there aren’t any laws or legal orders [that prohibit] people without certifications from carrying out restorations. Especially when in Spain, and specifically within Valencia, there are a large number of qualified specialists… And this lack of regulation translates into an absence of protection of our heritage, and that allows people without training to intervene on it, facing, at best, simple administrative sanctions.”

The Vice-President of ACRE’s Valencia chapter, Maria Borja Ortiz, added that botched-restorations are “unfortunately much more common than you’d think.”

It’s yet to be seen if any lawmakers, either at the federal level or within the autonomous communities of Spain, will move to regulate the industry.

See what others are saying: (El Pais) (The Guardian) (BBC)

Russian Bounties on U.S. Troops Resulted in Deaths, Officials Say. Here’s What You Need to Know

Chinese and Indian Forces Face-Off in Biggest Confrontation in Decades