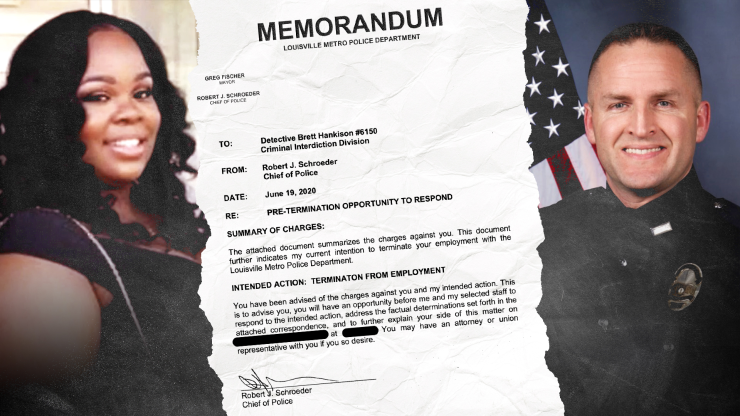 Brett Hankison, one of the three Louisville Metro Police officers involved in the shooting and killing of Breonna Taylor, is being fired, Mayor Greg Fischer said Friday.

“Unfortunately, due to a provision in state law that I very much would like to see changed, both the Chief and I are precluded from talking about what brought us to this moment, or even the timing of this decision,” the statement said.

Taylor was killed inside her apartment on March 13 after Hankison, along with Sgt. Jonathan Mattingly and Officer Myles Cosgrove, entered by force with a no-knock warrant and shot her at least eight times.

Taylor’s boyfriend, Kenneth Walker, fired at the officers whom he reportedly believed were intruders. The police fired back, killing Taylor. Walker later told investigators the officers failed to announce themselves after he and Taylor asked repeatedly who was at the door.

The no-knock warrant did not require the police to announce themselves, but the officers claimed they did so anyway before using a battering ram to open the door. Taylor’s family and multiple neighbors have disputed that claim.

The warrant in question pertained to a narcotics investigation that involved two men who police believed had used Taylor’s apartment to receive packages. Neither Taylor nor Walker had any prior drug arrests or convictions, and no drugs were found in the apartment.

Taylor’s death has led to nationwide protests and increasing calls for action to be taken against the officers who killed her. No charges have been filed, and Mattingly and Cosgrove have been placed on administrative reassignment.

Hakison’s pending termination represents the most significant action taken to date against the officers involved in Taylor’s death.

In a pre-termination letter sent to Hankison Friday, LMPD Chief Schroeder said that the officer violated standard operating procedures regarding obedience to rules and regulations.

“I have determined you violated Standard Operating Procedure […] when your actions displayed an extreme indifference to the value of human life when you wantonly and blindly fired ten (10) rounds into the apartment of Breonna Taylor,” he wrote.

He added that the rounds created “substantial danger of death and serious injury” to Taylor and three occupants in the apartment next door.

Schroeder also said that Hankison violated standard operating procedures pertaining to the use of deadly force when he fired into Taylor’s apartment “without supporting facts that your deadly force was directed at a person against whom posed an immediate threat of danger or serious injury to yourself or others.”

“I find your conduct a shock to the conscience. I am alarmed and stunned you used deadly force in this fashion,” the letter continued. “I have the utmost confidence in my decision to terminate your employment for the best interest for the Louisville Metro Police Department and our community.”

Along with this, Schroeder noted that Hankison had been previously disciplined in January 2019 for “reckless conduct that injured an innocent person.”

In recent weeks, Hankison has also been accused of sexual assault by multiple women in now-viral social media posts. The allegations, which are all similar, claim that he offered to drive intoxicated women home from bars then sexually assaulted them.

Though not mentioned in Schroeder’s letter, the LMPD Integrity Unit is already investigating the allegation against Hankison, and last week, Mayor Fischer ordered that the investigation be expanded.

See what others are saying: (USA Today) (WDRB) (ABC News)