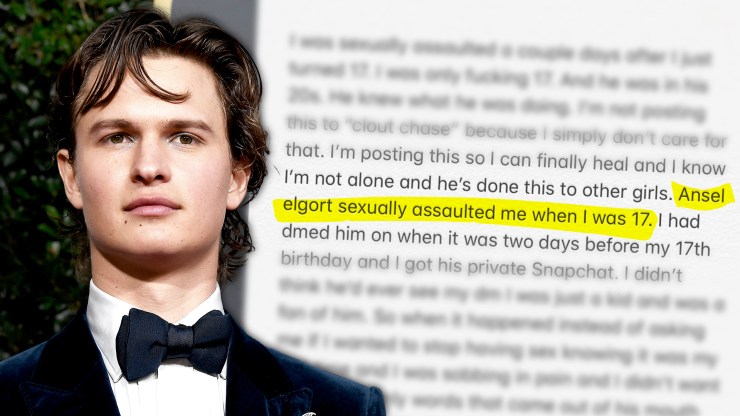 Actor Ansel Elgort has been accused of sexually assaulting a 17-year-old fan.

On Friday, a Twitter user named Gabby said she sent the actor a direct message on social media just before her 17th birthday because she was a huge fan. Elgort is best known for his roles in “The Fault in Our Stars” and “Baby Driver.” Gabby said that, to her surprise, Elgort responded to her message and gave her his private Snapchat.

She claims that assault occurred a few days after her birthday. She said it was her “first time,” and added,” I was sobbing in pain and I didn’t want to do it.” However, she claims all Elgort said in response knowing this was, “we need to break you in.”

“I disassociated myself and just felt like my mind was gone I was in in shock I couldn’t leave,” she added.

“He made me think this is how sex was supposed to be,” her post continued. “I WAS SO YOUNG AND HE KNEW THAT.”

“Finally I’m ready to talk about it and finally heal,” Gabby added. “I just want to heal and I want to tell other girls who have been through the same shit as me, you’re not alone.”

Gabby then shared two photos: one of her with Elgort and another of their alleged initial direct messages. In those messages, Elgort gives her his Snapchat and asks her to not give it out because it is personal. That screenshot appears to be dated to 2014, when Elgort was 20.

Gabby’s post was retweeted over 90,000 times and liked by over 220,000 Twitter users before she set her Twitter account to private. On Friday morning, Elgort became a trending topic on the website. His upcoming project, Steven Spielberg’s remake of the 1961 classic “West Side Story” also began to trend as some hoped he could be replaced by another actor. The film is scheduled to be released in December and Elgort is a leading character, so the likelihood of him being replaced is incredibly slim.

Reports indicate that Gabby’s story has not been corroborated and Elgort has not issued a response to these accusations. They were, however, not the only accusations thrown his way this week. Late on Thursday, an Instagram account called BlackAtLaguardia appeared to accuse the actor of racist behavior. While the post only mentioned someone named Ansel and did not include his last name, Elgort is an alumni of LaGuardia High School of Music & Art and Performing Arts, the school in which the account is centered on.

“Once I was in class and we were learning about the Niger River.” the post claims. “Ansel (Lag’s favorite) repeatedly mocked me and said “N**ger river” multiple times. Nothing was ever done about it.”

Many in the comments began to tag Elgort, believing it to be about him. He has not responded to the accusations here yet either as of Friday afternoon.

See what others are saying: (The Wrap) (Daily Dot) (NJ.com)