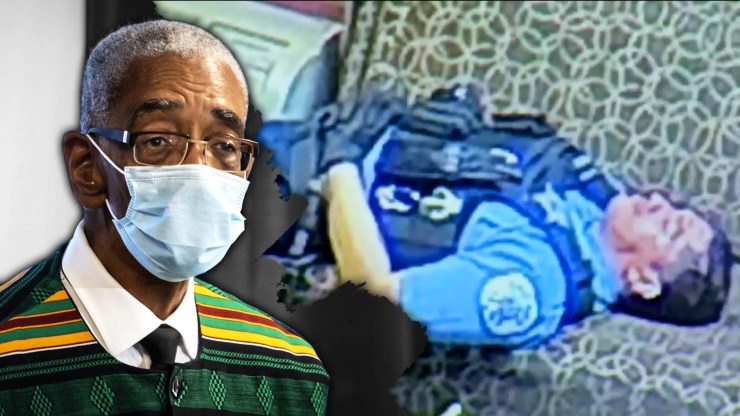 U.S. Rep. Bobby Rush (D-IL) said Thursday that security footage showed at least a dozen Chicago police officers drinking coffee, making popcorn, and sleeping on furniture in his office as nearby businesses were looted during protests over the killing of George Floyd.

Rush, a long-time congressman famous for co-founding the Chicago Black Panther Party, made the announcement at a press conference alongside Chicago Mayor Lori Lightfoot, who displayed stills of the video, which has not been released to the public.

At the conference, Rush said he was notified that his campaign office had been burglarized during an outbreak of civil unrest two weeks ago.

But when he reviewed the security footage from the incident, Rush said he saw the officers, including three supervisors, “lounging” in his office with their feet rested on his desks and one officer asleep on his couch.

“They even had the unmitigated gall to go and make coffee for themselves and to pop popcorn, my popcorn, in my microwave while looters were tearing apart businesses within their sight and within their reach,” Rush said.

“They were in a mode of relaxation and they did not care about what was happening to businesspeople, to this city. They didn’t care. They absolutely didn’t care.”

Following Rush’s remarks, Mayor Lightfoot condemned the police and apologized to the congressman.

“That’s a personal embarrassment to me,” she said. “I’m sorry that you and your staff even had to deal with this incredible indignity.”

“Their conduct will confirm the perception that too many people on the South and the West Side were left to fend for themselves,” she continued. “That police don’t care if Black and brown communities are looted and burned.”

Lightfoot later promised that the incident would be “thoroughly” investigated and that the state’s attorney and U.S. attorney will review the case. She also said that all officers involved would be identified and that she wanted “the strongest possible action” to be taken.

“I can tell you one thing for certain, not one of these officers will be allowed to hide behind the badge and go on and act like nothing ever happened,” she said. “Not anymore. Not in my city, not in your city.”

Police leadership also castigated the officers and said they would hold them accountable.

“This kind of conduct means that if you sleep during a riot, what do you do on a regular shift when there’s no riot? What are you doing when there’s no crisis?” said Police Superintendent David Brown. “I’m not playing with you that I mean what I say when I say we’ll hold you accountable.”

“Move, get out of the way, but we are going to uphold the nobility of this profession. This conduct is not representative.”

“The same time that these 13 officers were popping popcorn, taking a nap, relaxing inside this office, I was standing shoulder to shoulder with hundreds of other officers on State Street as we got pelted with rocks from rioters.”

Catanzara asserted that, based on the light outside the windows in the images, it was early morning and the looting that had taken place in the area was over by the time the officers arrived. He said that they were simply tired and bored from guarding the office all night.

“It’s disgusting that they would challenge the honor of those (officers) that were in the office that night, as if they would stand there and let people die,” he said. “The rioting was done. The whole mall was looted on Sunday.”

Mayor Lightfoot said the footage shows that the officers first entered the office at 1 a.m. on Sunday, June 1, and remained there for four to five hours.

The Chicago Police Department has yet to comment but announced that it was launching an internal investigation into the occurrence in a statement posted to Twitter Thursday.

See what others are saying: (The Chicago Tribune) (NBC) (CNN)