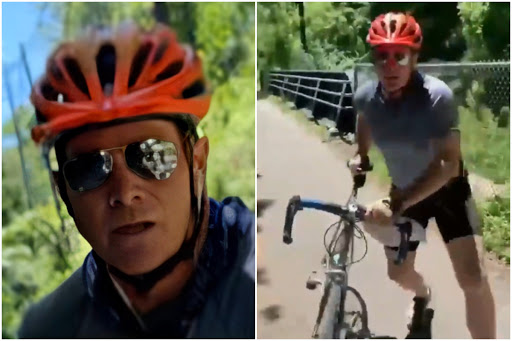 Authorities in Maryland are asking the public for assistance in identifying a cyclist who was caught on video assaulting three young adults as they posted flyers demanding justice for George Floyd.

The incident took place on the Capital Crescent Tail in Montgomery County on June 1, and a cell phone video of what happened was later shared online.

The video begins with the cyclist, who appears to be a white male, approaching one young woman with a flyer already in his hand. “Get away from me,” she tells him.

The man grabs the second woman’s wrist and aggressively pulls a roll of tape off her arm as she tries to resist. The first woman then appears on screen pushing him away and yelling, “Hey, get off of her!”

“Fuck you,” the man responds, then heads towards his bike.

When the person filming tells him to leave, the cyclist grabs his bike and charges towards him. The man recording runs before dropping the cell phone. From there, the cyclist is heard saying, “You want it? Give it to me,” as the fallen individual replies, “There’s the tape.”

“He was just cycling down the trail,” the victim recording, who wished to remain anonymous, told Path.com.

“He videoed us on his first pass by, then stopped about 50 feet passed us and asked to see my signs, in a friendly tone. When I went to show him the signs he ripped them out of my hands and then started to go after my friends. That’s when I started recording.”

Speaking anonymously once again, that victim told NBC Washington that the cyclist rammed him with his bike and pinned him to the ground. He also told the outlet that all three victims, including two 19-year-old women, are adults, despite reports from internet users and news outlets claiming one was a child.

“Honestly, I was mostly scared for my friends,” he told Patch. “While I’m young, I’m not a tiny person and I can defend myself if need be … my friends that I was with are both small women and to have a large man approach them and physically rip things out of their hands is quite terrifying, and they were both pretty shaken up after.”

According to some reports, the anonymous cameraman posted the footage on Reddit. Though it cannot be confirmed if the Reddit user is the same person who spoke to reporters, they shared a similar explanation about what lead up the incident online.

That user also posted a photo of the flyer the group was allegedly hanging up, which reads: “Killer Cops Will Not Go Free – Text ‘Floyd to 55156.’”

Park Police tweeted a post on June 2, asking the public for identifying information, along with the number for the detective on the case.

After the footage spread across social media, many began trying to help. As a result, a Bethesda man named Peter Weinberg was accused of being the man responsible for the attack. That’s because users found evidence that he had biked the trail on May 31 and June 2, however as police later clarified, the incident took place on June 1.

Internet users began tweeting at his employer and sharing his LinkedIn information. Then, Weinberg issued a statement Thursday saying he had been “misidentified in connection with a deeply disturbing attack.”

He later shared a police report to prove he was excluded as a suspect in the case.

Maryland Attorney General Brian Frosh also asked that the public help identify the cyclist, however, after seeing Weinberg be falsely accused online, he asked people to share their tips to authorities instead of posting them online. “Hundreds of thousands of bikers, myself included, use this path,” he warned.

Many on social media continued to make accusations, eventually spreading a rumor that the cyclist is a former Montgomery County police officer. By Friday afternoon, however, the department released a statement calling that claim false.

See what others are saying: (Patch) (Insider) (NBC Washington)

Minneapolis Moves to Defund the Police. Here’s What That Means