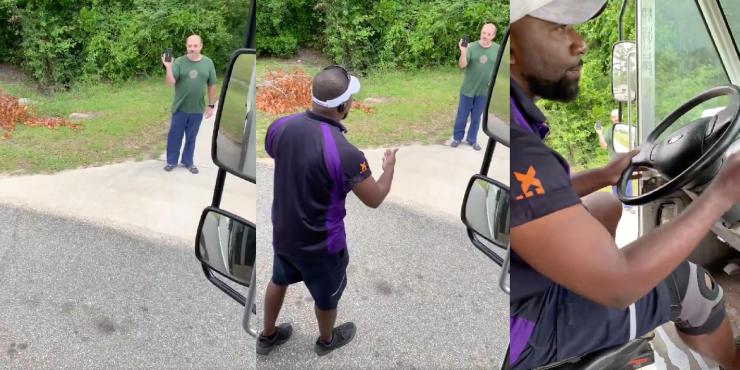 FedEx has responded to reports that it fired two black drivers in Georgia on Wednesday after one posted video of a heated exchange they had with a customer who they say racially profiled them.

The incident happened Tuesday when the two workers, identified as Antonio Braswell and Felinzay (last name unverified), were delivering packages in the small town of Leesburg.

According to Braswell, the confrontation began when they approached a house to deliver a package. In a tweet, Braswell said a white male ran out of the house, threatening and cursing at them.

“He kept escalating the situation then kept saying he would whoop [our] black asses,” Braswell added.

Braswell went on to say that the man told his wife to call the police. That man then allegedly followed the two workers and pulled out his phone to record them. Though Braswell said, at first, he and Felinzay drove away, Felinzay stopped the truck when the man allegedly yelled, “fuck y’all.”

Felinzay then got out of the truck and Braswell began recording the now-viral incident, which has attracted more than 6 million views on Twitter alone.

“Where you going?” the man asks several second later as Felinzay steps back into the truck.

“I thought you were waiting for cops?” the man asks.

“Yeah I thought you were going to whoop my ass, too?” Felinzay says as he drives away from the man.

Notably, the video does not show the customer actually yelling at or definitively racially profiling the two workers. It also does not show what happened following the incident, but according to Braswell, police arrived soon afterward. Both sides then gave their testimonies.

Also according to Braswell, the man who allegedly confronted them told police that the two employees “look like they would’ve broke into my house while my wife was there.” To note, that statement has not been confirmed by the Leesburg Police Department.

With such accusations, Braswell noted that this is certainly not the first time he’s experienced racial profiling.

“Mind y’all, we go through this all the time,” he tweeted. “He was the first to actually come at us crazy and all we doing is our job. We work 6 days out the week to deliver these packages during this coronavirus going on.”

To be clear, this is Braswell’s version of the events that happened. Neither Felinzay nor the unidentified customer have publicly given their side of the story.

After the incident, Braswell posted the incident online, where support for him and Felinzay skyrocketed, especially after he announced on Wednesday that FedEx had fired them both.

“Update,” he said, “FedEx called and told me to take down this video and fired both of us Today .. I’m reposting this video because people like him doesn’t matter white or any race should never disrespect essential workers putting their lives in jeopardy especially with this covid-19.”

Following that, #boycottFedEx began to trend on Twitter, with many people calling for both men to be reinstated.

Other noted how they believed the video and testimony from Braswell seemed to bare marked similarity to Ahmaud Arbery’s murder case.

On Wednesday, a GoFundMe page was also created for the two workers. It has currently raised more than $64,000, which will reportedly be split between the two men once the fund caps out at $75,000.

FedEx later clarified the situation regarding Braswell and Felinzay’s firing late Wednesday night, saying on Twitter that the two men were not actually FedEx employees.

“We are aware of the incident in [Georgia] that led to the release of two drivers employed by a service provider,” the company said. “We’re offering employment while investigating to ensure an appropriate outcome. We take seriously allegations of discrimination, retaliation, or improper employment actions.”

So far, Braswell has not publicly responded to that offer nor has he answered media requests for an interview.

See what others are saying: (CNBC) (Newsweek) (Atlanta-Journal Constitution)