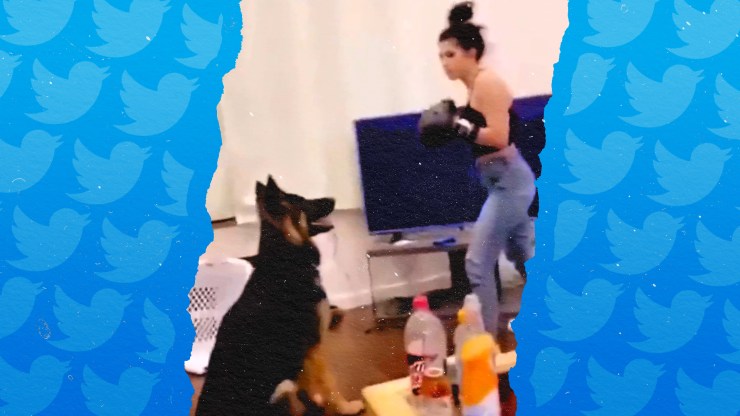 The Idaho Humane Society launched an animal cruelty investigation into a woman who was seen punching a dog while wearing boxing gloves in a video that was reportedly posted on Snapchat.

In the clip, which has since been reshared on other social media sites, the woman is seen repeatedly punching a German Shepherd in the face as if she were boxing with another person.

“Boxer and animal. Where’s Sarah McLachlan?,” someone in the background can be heard saying, referring to the singer and well-known animal-rights activist whose songs have been featured in ads for the American Society for the Prevention of Cruelty to Animals (ASPCA).

After one especially hard punch, the dog can be heard yelping. “I hit him so hard I felt that through…,” the woman says before the clip ends.

Warning: the video may be disturbing to some viewers.

The Idaho Humane Society said it launched an official investigation into the video after it received an overwhelming number of calls and emails reporting the incident.

In a Facebook post shared Monday, the organization said the individual was identified and a Humane Officer was sent over to discuss the situation. It added that the investigation is pending review at the local prosecutor’s office for a charging decision.

Prosecutors could choose to charge the woman under Idaho statute 25-3518: Beating and Harassing Animals. The misdemeanor charge carries a maximum sentence of up to six months in jail and as much as $5,000 in fines, according to The Idaho Statesman.

While the organization did not name the woman, internet users and media outlets have identified her as London Miner. Some online have begun doxing her, going so far as to share her home address, phone number, and workplace information. Others have created social profiles dedicated to gathering information about her and keeping track of this case.

As people began drawing attention to the video, a screenshot allegedly between Miner and one of her Snapchat followers surfaced showing her defending her behavior by saying, “He is my dog. He plays ruff and loves playing. I’m the same weight as him. U really think I’m strong enough to hurt him? No.”

When the follower replies with, “That doesn’t look good and you know that,” they are met with the response: “Do u think I care.”

However, another individual messaged a Twitter user that shared the video, claiming that they are the dog’s owner. Still, this person expressed a similar defense, saying, “He plays hard. A girl gonna hit him a little bit and you guys wanna press some girl hitting him with gloves. Never got hurt and was playing the entire time. I’d never let my dog get hurt.”

That account has since been deleted, but on top of that, Heavy reported that Miner’s father is an officer who has worked for the Ada County Sherrif’s Office for over a decade.

Screenshots of a Facebook comment he allegedly posted have also surfaced. The comment explains that the dog is okay but adds, “That dog beats the crap out of our dogs and they all play much harder than that. It’s very silly. But now we are all dealing with people threatening to come to my house and ‘cut’ ‘fuck her up.’”

It’s difficult to verify whether or not any of these screenshots are actually from individuals connected to the incident. Regardless, the Idaho Humane Society has stressed that this situation is being addressed.

The organization asked people to please stop reaching out to them about the clip since it is currently being dealt with. It said the flood of calls reporting the same video “delays other urgent cases from receiving immediate attention.”

“We need other calls, emails, and messages to get through as we are the only animal control agency for the county. Thank you for your understanding and cooperation in this matter,” it added in its statement.

See what others are saying: (Independent) (Idaho Statesman) (Heavy)