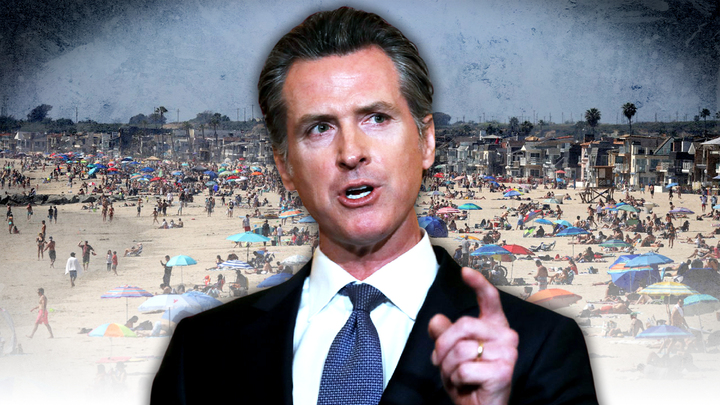 The cities of Huntington Beach and Dana Point held emergency City Council meetings to discuss the order, which calls for closures to begin as early as Friday.

Last weekend, thousands flocked to Orange County beaches during a heatwave in a move that frustrated the governor, who warned that such behavior could make coronavirus cases in the state spike.

“The conditions last week, the images we saw at a few of our beaches were disturbing,” he said Thursday, specifically calling out county beaches in cities like Newport.

Local officials throughout Orange County have argued that the majority of beachgoers were following social distancing rules. They also say Newsom made the decision based on “misleading photographs” showing packed crowds along the shores.

“Specific issues on some of those beaches raised alarm bells,” Newsom said in a press conference Thursday. “We’re gonna do a hard close in that part of the state, just in the Orange County area. We’re working with the county.”

“(They) may not even know that they contracted the disease and now they put other people at risk, put our hospital system at risk,” he added.

But his comments were met with pushback from city councilmembers who argued that such a decision should fall upon local leaders and not the governor.

Huntington Beach’s City Council voted 5-2 in favor of directing the City Attorney to pursue legal action to challenge the order. On top of that, Mayor Lym Semeta called the governor’s order “jarring.”

“Given that Orange County has among the lowest per-capita COVID-19 death rates in California, the action by the State prioritizes politics over data, in direct contradiction of the Governor’s stated goal to allow science and facts to guide our response to this horrible global pandemic,” the mayor said in a statement.

Under the order, Huntington Beach will now be closing beaches, as well as bike paths, boat ramps, restrooms, parking lots, and associated recreational amenities. Activities like sunbathing, walking, running, and watersports are also prohibited in those areas.

Dana Point voted 4-1 to participate in legal action set to be formally filed Friday, “seeking a temporary restraining order against the governor and state of California for the order to shut down beaches in Orange County,” Dana Point City Attorney Patrick Munoz announced in the meeting.

Along with outrage over the decision, Dana Point Councilman Joseph Muller criticized the Newsom’s office for providing inconsistent information on a conference call with city council members and elected officials.

“[H]is representative was stating that this was a statewide closure during the conference call at the exact same time [Newsom] was holding his press conference live and singled out Orange County,” Muller said over the phone during a live-streamed emergency city council meeting. “That’s very disturbing to me that they would play a game like that, so giving us info in a meeting while he’s out publicly saying something very different.”

Dana Point Mayor Richard Viczorek backed up Muller’s account of that conference call, saying during his city council’s meeting, “As the governor was speaking there was a conference call scheduled with elected officials from Orange County.”

See what others are saying: (Fox News) (Politico) (NPR)

Tensions Escalate at Lockdown Protests Across the U.S.