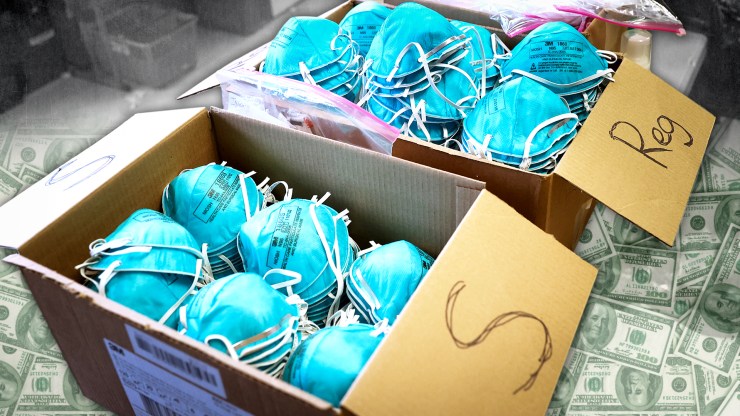 A man in New York has become the first person to be hit with federal charges under the Defense Production act for hoarding and price gouging desperately needed medical supplies during the coronavirus pandemic.

Before the virus outbreaks were a huge concern, 45-year-old Amardeep “Bobby” Singh was mostly selling clothing and shoes online and at his store in Plainview, New York. However, by mid-March, he began accumulating medical supplies that are highly sought after, especially within the state.

He allegedly set aside a section of his store for “COVID-19 Essentials,” selling them at inflated prices, according to a statement from the Justice Department.

Singh first caught the attention of authorities on March 18, when he was cited by Nassau County officials for engaging in “unconscionable trade practices.” That citation was related to Singh selling individual N95 masks packaged in Ziploc bags in violation of the state’s consumer protection laws.

Between March 19 and March 31, he was hit with six more citations for selling outdated supplies and items without proper labeling or instructions. Then on April 1, the state attorney general’s office issued a cease and desist order against his business for price gouging.

But even after all that, Singh apparently continued hoarding and selling, prompting federal prosecutors to step in.

In a criminal complaint against him, prosecutors say he even marketing the items on social media, showing the gear and letting people know what was in stock.

The court documents also list the estimated markups for each item he sold. For instance, Singh allegedly offered face shields for $9.99, a 222% markup, after acquiring them at a cost of $3.10. Disposable face masks were marked up 1,328% from 7 cents each to $1.

Some of the places he allegedly price-gouged were vulnerable organizations like the Association to Benefit Children, the New York Foundation for Senior Citizens, and Rewarding Environments for Adult Living

Singh was charged with violating the Defense Production Act of 1950 in what authorities described as the first such prosecution during the coronavirus pandemic. Trump signed the DPA on March 18, which among other things, makes it is illegal to hoard and resell scarce medical supplies needed to treat the outbreaks.

Singh is expected to surrender to authorities next week and he faces up to one year in prison if convicted, However, his attorney, Bradley Gerstman, said his client did not price-gouge anyone.

“This is a man trying to make a living,” Gerstman told BuzzFeed News. “He’d never gouge. He’s a family man who has run a store for people in the community for 25 years. He’s got three young daughters, and we’re going to plead not guilty and then we will show by way of evidence that our client has done nothing wrong.”

“This is news to everybody in the country that selling [personal protective equipment] is illegal under the Defense Production Act,” said Gerstman told Buzzfeed. “I can understand civil fines and penalties, but here we have a matter where my client is now subjected to criminal charges for something that he had no idea he was doing was wrong.”

“If selling PPE goods is improper or criminal, then a lot of people need to go to jail,” Gerstman said in a telephone interview with TIME.

“The Defense Production Act is wildly vague, and I don’t think this would pass muster on any appellate level. I think this statute would be struck down as null and void.”

Federal officials, on the other hand, have slammed Singh’s actions as un-American.

“During a crisis of this magnitude, we must come together as a country to fight this common enemy,” said Philip R. Bartlett, inspector in charge for the U.S. Postal Inspection Service’s New York division. “Unfortunately, Mr. Singh allegedly chose to use this opportunity to make money by hoarding and price-gouging [personal protective equipment]. The conduct charged in the complaint is reprehensible and against our most fundamental American values.”

See what others are saying: (Time) (The Hill) (NBC NY)

Trump May Scale Back on Virus Briefings After Disinfectant Debacle