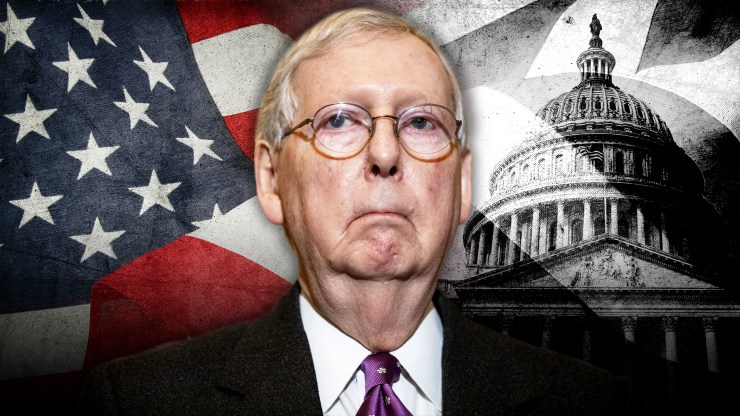 The Senate failed to pass a $1.8 trillion stimulus package Monday after Democrats voted unanimously to block the bill for the second time in the last 24 hours.

Senators voted 49-46, far below the 60 votes needed to move forward with the bill, which is intended to help prop up the economy as the coronavirus pandemic continues.

The stimulus package, which would be one of the largest in U.S. history, has been the subject of much partisan debate over the last few days.

While Republicans say it is essential to help the economy and working people, Democrats oppose the legislation because they believe that it does too much to help businesses and not enough for everyday Americans and hospitals.

The bill would provide about $250 billion for direct payments to households consisting of about $1,200 for each adult and $500 for each child. Those payments would phase out for people with incomes over $75,000.

The package also includes around $100 billion for hospitals and about $250 billion to help state unemployment insurance programs.

By contrast, the legislation would also create a $500 billion loan program for businesses, cities, and states while giving another $350 billion to small businesses.

In addition to arguing that the bill is too business-centric, Democrats also object to the lack of oversight.

Especially for the $500 billion lending program, which some Democrats are calling it a “slush fund,” because it would give the Treasury Department huge discretion to choose which firms get the money.

According to reports, some Democrats have alleged that the legislation would essentially give the department the sway to direct funds to companies that have appealed to the White House.

Democrats have additionally expressed concern that the bill does not have enough restrictions for companies that will receive that aid, specifically when it comes to worker protections.

They believe that without specific worker protections or any kind of oversight built into the legislation, companies who get the money could just fire their employees and pocket the taxpayer assistance.

President Donald Trump appeared to address the Democrats’ concerns on Sunday. Speaking to reporters, Trump said that he did not support corporate bailouts and wanted to help workers. But when asked if his businesses would seek government assistance if eligible, he would not rule out the possibility.

“I don’t know,” he said. “I just don’t know what the government assistance would be for what I have. I have hotels. Everybody knew I had hotels when I got elected. They knew I was a successful person when I got elected, so it’s one of those things.”

Efforts by Republicans and Senate Majority Leader Mitch McConnell (R-KY) were further complicated by the fact that five Republican senators are in self-quarantine and unable to vote.

On Sunday, Sen. Rand Paul (R-KY) confirmed that he had tested positive for the coronavirus.

Paul, who is the first senator to contract the virus, was the only member of the chamber to vote against a bipartisan deal to provide $8 billion in emergency coronavirus funding earlier this month.

Following Paul’s announcement, Republican Senators Mitt Romney and Mike Lee of Utah said that they would be self-quarantining after extensive exposure to Paul, though both said they had not exhibited symptoms at the time.

Meanwhile, two other Republican senators— Cory Gardner of Colorado and Rick Scott of Florida— also separately quarantined themselves last week after being exposed to people who tested positive.

All five senators were unable to vote for the package on both Sunday and Monday.

See what others are saying: (Axios) (The Washington Post) (NPR)