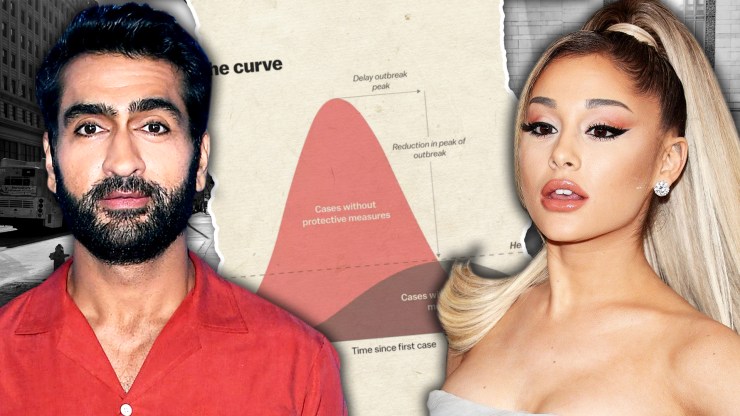 While states and cities are closing bars, restaurants, and other public spaces, celebrities are also doing their part to “flatten the curve” of the coronavirus spread.

Massachusetts, California, New York, New Jersey, Connecticut, Ohio and Michigan have all mandated that restaurants and bars close for dine-in services to further prevent the spread of the coronavirus. Other states and municipalities have also taken their own similar measures.

The goal of this is to prevent people from congregating in large public groups and to promote social distancing – a tactic experts believe is effective in slowing the spread of disease. Social distancing involves not going to public spaces, crowded areas, or anywhere where you cannot be at least six feet away from someone. This distance makes it harder for the infection to spread.

“What we can’t have is people congregating and seated. Every day we delay, more people will die,” Ohio Governor Mike DeWine said in a statement. “If we do not act and get some distance between people, our health care system in Ohio will not hold up. The loss won’t only be those impacted by COVID19, but the danger is also to everyone else who needs hospital care for other issues.”

Containing the spread of COVID-19 has been a difficult challenge for leaders as some people may be carrying the virus without even knowing or exhibiting symptoms.

“We now know that asymptomatic transmission likely [plays] an important role in spreading this virus,” Michael Osterholm, director of the Center for Infectious Disease Research and Policy at the University of Minnesota explained CNN. Because of this, the virus is “very difficult to control.”

Asymptomatic transmission can be made especially dangerous because someone who believes they are in perfect health could then infect a more vulnerable party, like someone with pre-existing conditions, a weak immune system, or an elderly person. Despite efforts to spread this knowledge, bars and restaurants still saw crowds over the weekend.

Out of concern for this, journalists and internet users warned that continued public appearances could lead the United States down a similar path that Italy is on. Currently, Italy has seen over 24,000 cases and over 1,800 deaths. The whole country is also on lockdown. According to data from Vox, the rate of case increases in the U.S. is on pace with that of Italy.

Many began to share videos of people in Italy congregating in areas just days before they were put on lockdown as proof that if the U.S. does not practice social distancing, they will find themselves in the same situation. Actor and writer Kumail Nanjiani was among them.

“These tweets are from Italy 2 weeks ago. 10 days later, the entire country was in lockdown. We are on the exact same path,” he said. “We can learn from Italy’s mistake.”

“Stay away from crowds. It’s our responsibility to protect those in at risk groups,” he added.

Nanjiani’s wife, Emily Gordon, is among those at risk, as she has a rare disease that makes her immunocompromised. Their Oscar-nominated film, The Big Sick, which they wrote together, discusses this illness. Because of it, Nanjiani feels a certain responsibility to encourage social distancing.

“People get upset and annoyed at me when I tweet about the coronavirus, when I urge people to stay in and avoid crowds,” he wrote. “My favorite person in the world is immunocompromised.”

He was not the only celebrity telling people to stay at home. Ariana Grande told her fans that “it’s incredibly dangerous and selfish to take this situation that lightly.”

“I keep hearing from a surprising amount of people statements like ‘this isn’t a big deal’ / ‘we’ll be fine’… ‘we still have to go about our lives’ and it’s really blowing my mind,” she wrote. She also told followers the plans they have now are not important in light of the virus.

Taylor Swift also addressed her concerns on her Instagram story.

“I’m seeing lots of get togethers and hangs and parties still happening,” the pop star wrote. “This is the time to cancel plans, actually truly isolate as much as you can, and don’t assume that because you don’t feel sick that you aren’t possibly passing something onto someone elderly or vulnerable to this.”

“It’s a really scary time but we need to make social sacrifices right now,” she added.

Data and research on the benefits of social distancing back up the calls from these celebrities. Tomas Pueyo, an author and designer wrote a Medium post about its effects. Taking a look at theoretical data, he illustrated that social distancing flattens the curves on cases, and by practicing social distancing sooner, fewer cases come up.

See what others are saying: (Washington Post) (Axios) (Aljazeera)