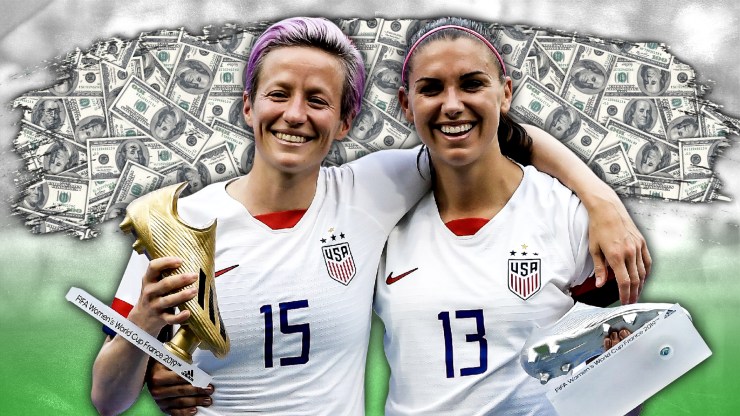 The president of the United States Soccer Federation apologized Wednesday for “sexist” comments made in a legal filing against the Women’s National Team.

“On behalf of U.S. Soccer, I sincerely apologize for the offense and pain caused by language in this week’s court filing, which did not reflect the values of our Federation or our tremendous admiration of the Women’s National Team,” U.S. Soccer President Carlos Cordeiro said in a statement, just after the women’s team won the title game of the SheBelieves Cup.

“I have made it clear to our legal team that even as we debate facts and figures in the course of this case, we must do so with the utmost respect not only for our Women’s National Team players but for all female athletes around the world,” he added. “As we do, we will continue to work to resolve this suit in the best interest of everyone involved.”

In March, the women’s team filed a lawsuit against U.S. Soccer alleging gender discrimination and violations of the Equal Pay Act. A court filing from U.S. Soccer released on Monday said that, for a variety of reasons, the Women’s National Team does not deserve equal pay to the Men’s National Team. The women have long argued that their back-to-back World Cup wins, consistently higher FIFA rankings than the men’s team, and other factors make them worthy of the money.

In their filing, however, U.S. Soccer said that playing on the men’s team “requires a higher level of skill based on speed and strength.” It claimed that biological differences between men and women make men innately stronger and faster.

“No matter how great the great Katie Ledecky gets…she will never beat Michael Phelps or his endurance counterparts in the pool,” the filing stated, citing a study on the subject.

The filing also claimed that a men’s player “carries more responsibility” in their role, as they play more tournaments with big cash prizes, and generate more views on television games. It also claimed that the men frequently play abroad facing “unmatched” hostility from opposing fans.

This rhetoric has not been received well by the players of the women’s team. Co-captain Alex Morgan has previously said that women’s soccer does not require less skill, but “a different skill.” When co-captain Carli Lloyd was challenged about the women’s ability to be competitive against the men, she said, “I’m not sure. Shall we fight it out to see who wins and then we get paid more?”

Outrage From Public and Sponsors

The comments made by U.S. Soccer led to public outrage, including from some of their sponsors. A representative from the accounting firm Deloitte told a BuzzFeed News reporter that they were “deeply offended” by the views expressed in the lawsuit.

The Vice President of Budweiser, Monica Rustgi issued a statement along those same lines.

“The comments made by U.S. Soccer do not align with our values, nor our point of view on women’s soccer,” she said. “We champion and admire the athleticism of the women in this sport as we find them to be among the best athletes in the world.”

Frustration did not stop at sponsors for the organization. Sports Illustrated an article demanding that Cordeiro resign. The Women’s National Team took to the field in a silent protest on the matter as well.

While playing in the Wednesday game of the SheBelieves Cup, the women turned their jerseys inside out, hiding the U.S. Soccer logo. Instead, all that could be seen were the four stars on their jerseys, each representing a World Cup win.

“To every girl out there, to every boy out there, who watches this team who wants to be on this team or just wants to live their dream out, you are not lesser because you are a girl,” said player Megan Rapinoe during the game. “You are not better just because you’re a boy. We are all created equal.”

After the game, Rapinoe also addressed Cordiero’s apology after the game. She said she did not find it sincere.

“That wasn’t for us,” she told reporters. “That’s for fans, that’s for the media, that’s for sponsors, because that all sounded pretty similar to what we had heard before.”

See what others are saying: (ESPN) (Sports Illustrated) (Washington Post)