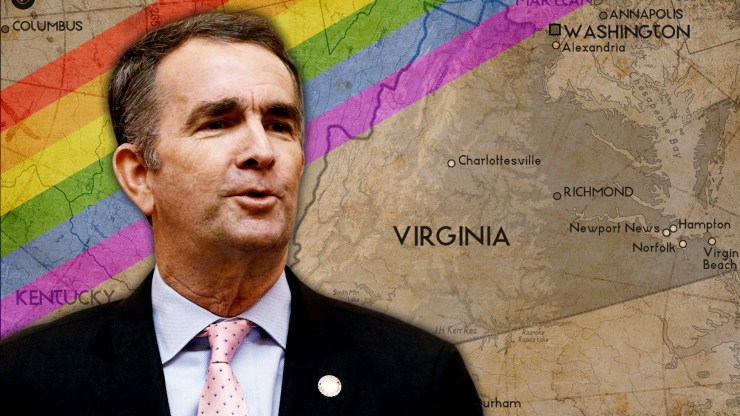 Virginia marked a huge LGBTQ rights milestone this week when it became the first Southern state in the country to ban conversion therapy for minors, the largely discredited practice of trying to forcibly change a person’s sexual orientation or gender identity.

Gov. Ralph Northam made the ban official when he signed House Bill 386 into law on Monday. The governor said he was “proud” to pass the legislation.

“Conversion therapy sends the harmful message that there is something wrong with who you are,” Northam said in a statement. “This discriminatory practice has been widely discredited in studies and can have lasting effects on our youth, putting them at a greater risk of depression and suicide. No one should be made to feel they are not okay the way they are—especially not a child.”

Set to take effect on July 1, the law prohibits licensed medical professionals from providing conversion therapy to minors. Doing so “constitutes unprofessional conduct and is grounds for disciplinary action.” It also blocks state funds from being used for the practice with people under the age of 18. The measure does not apply to adults who wish to opt into conversion therapy themselves.

“Conversion therapy is a dangerous, destructive practice,” Hope said. “We should be supporting and celebrating our LGTBQ youth, not putting them in harm’s way.”

Including Virginia, 20 states, as well as the District of Columbia, have now outlawed the practice. California was the first to make this move in 2012.

North Carolina banned the use of taxpayer money for conversion therapy last August, but medical professionals are still allowed to practice it on minors, according to the think tank Movement Advancement Project.

LGBTQ youth who had undergone conversion therapy were more than twice as likely to attempt suicide as those who did not, according to a 2019 survey by the Trevor Project, a nonprofit focused on suicide prevention and crisis intervention for LGBTQ youth.

“As a survivor of this dangerous and fraudulent practice, I can’t fathom just how many young LGBTQ lives may be saved with these critical protections from conversion therapy,” Brinton said in a statement.

“This bold action will send a message to all LGBTQ young people in the great Commonwealth of Virginia that they are loved and deserve support,” Brixton added.