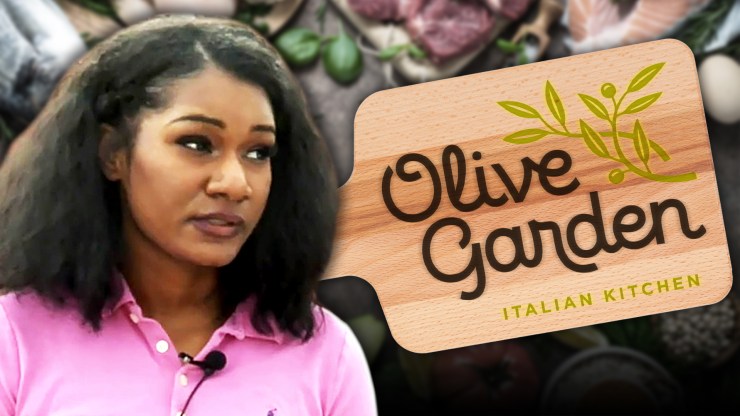 Olive Garden has terminated the employment of an Indiana restaurant manager who complied with a white customer’s demand to be served by a non-black employee.

The incident happened at an Evansville restaurant during Saturday’s dinner rush when the customer in question was seated with her party. The female guest allegedly became very angry and loudly requested a cup of hot water from a server that wasn’t black, a request that the manager honored.

But the woman apparently wasn’t only unhappy with her server. Amira Donahue, a 16-year old black hostess at the restaurant, told the Courier & Press that the guest also complained about her performance. She said the woman complained to management at least two times, calling Donahue rude and disrespectful.

In a Facebook post about the incident, Donahue wrote, “All I said to this woman was ‘sorry I don’t know’, ‘have a nice day’ and ‘excuse me’ when she was standing in the way of [an] extremely busy restaurant.”

Donahue went on to say that at one point the customer stood in the middle of the restaurant lobby and started screaming at her in front of other guests. She added that the woman also made comments to a different employee about her as well, insinuating that Donahue doesn’t speak English and referring to her as the “other one.”

“That lady said awful things about me ‘is she even from here? Is she like Jamaican or something,’” she wrote in her post. “If she doesn’t wanna be family friendly she should work as a strip club,” the customer also allegedly said.

Before the woman left, Donahue claims she even asked for a refund despite eating most of her meal. “She should’ve been kicked out ASAP. But I guess the racist customer is more valuable than your black employees that were left in tears.”

Maxwell Robbins, a 22-year-old customer who witnessed the ordeal, was so frustrated by what he had seen that he called Olive Garden to complain. He also confirmed to NBC News that he had seen Donahue in tears and took to Facebook to shared what happened.

“I’m never going back to the Olive Garden in Evansville,” he wrote before giving his account of the customer’s request. “The manager without hesitation ensures that they will not receive service from a person of color,” he continued.

“That couple should’ve been refused service for even asking something like that!! It’s disgusting that olive gardens manager would allow that especially with a very diverse staff.”

On Wednesday, a spokesperson for Olive Garden said that the company had launched an investigation after two black employees reported racial discrimination. The company said it completed its inquiry by Monday adding, “We have zero tolerance for discrimination of any kind, and the manager involved no longer works for our company.”

Donahue spoke to various news outlets about the incident but said that the other black worker involved wasn’t emotionally ready to speak out. While Donahue said the situation makes her upset, she is glad to see supportive coverage and wants to make a change.

The witness who complained also updated his original post after learning of the manager’s firing. “It seems like Olive Garden made a massive effort to ensure that this will not happen again and one of the girls I have spoken to seems to be in good spirits with the company.”

“We got done what needed to be done and it shows that we will not stand for any racism around here! I love all of y’all and I just want to say she is the sweetest host I’ve ever met at any restaurant, I’m glad Olive Garden took care of her. I haven’t heard much about the server unfortunately, I hope she is doing much better.”

See what others are saying: (NBC News) (Today) (Courier&Press)

“Naked Philanthropist” Defends Herself After Accusations of Sex Trafficking