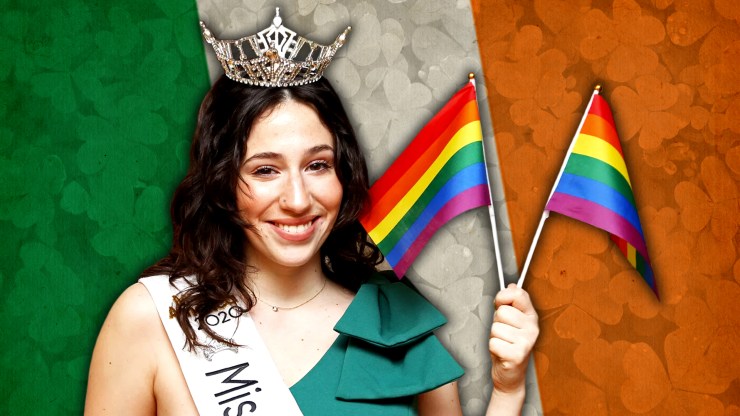 As Staten Islanders held their annual St. Patrick’s Day parade on Sunday, there were several noticeable absences among the marchers—Miss Staten Island and anybody openly representing the LGBTQ community. Madison L’Insalata, who holds the pageant title, was confined to the sidelines after she came out as bisexual.

L’Insalata, 23, revealed her sexual orientation to The New York Post and the Staten Island Advance over the weekend. She also told the outlets about her plan to wear rainbow gear at the parade as a symbol of LGBTQ pride. Her motives stemmed from the parade organizers’ decision to deny the Pride Center of Staten Island’s from participating in the parade, a rejection that has occurred repeatedly in past years.

“I thought this might be a good time to really make a statement and take a stand,” L’Insalata told ABC7. “I wanted to announce that I would be marching in the parade with rainbow colors and showing and coming out and saying that I was bi because I wanted people to see the colors.”

Shortly after the news outlets published her public coming out on Saturday, L’Insalata received a call from the director of Miss Staten Island Scholarship Pageants, Jim Smith. He had heard from parade organizer Larry Cummings, who said that L’Insalata and another pageant queen who had supported her were not allowed to march.

“I was stunned by the whole thing,” Smith told CBS New York. “I wasn’t prepared. He just said we’re worried about her safety, like he’s doing us a favor.”

L’Insalata didn’t fully believe the decision was made for her security.

“It seems that it might have more to do with me coming out as bi, and my wearing my rainbow scarf that I have here, and them not being okay with that,” L’Insalata told ABC7.

The pageant queen wasn’t the only one barred because of her colorful accessories. City Councilman Joseph Borelli (R) said he was physically blocked from marching and told he could not participate due to the rainbow-flag pin he was wearing.

“They called the police on me,” Borelli told the Staten Island Advance. “I spoke to a sergeant and was not going to make the life of our cops more complicated to prove a point. …I didn’t come with it looking for an argument; my friends handed a pin to me. I really didn’t think it was a big affront to the Irish.”

L’Insalata, for her part, still showed up to wear her rainbow accessories on the side of Sunday’s parade.

“I just realized that even if I wasn’t going to be allowed to march, I could still make a difference,” L’Insalata told the Washington Post. “And I think that I still sparked conversation.”

Staten Island’s is the only St. Patrick Day parade in the city that still bans LGBTQ groups from participating.

“Here’s the deal, it’s a non-sexual identification parade and that’s that, no, they are not marching,” Cummings told the Staten Island Advance earlier this year when asked why the Pride Center was denied.

Cummings and the other organizers have faced repeated backlash for their exclusivity. Several politicians refused to participate in the Staten Island parade after the decision to ban the Pride Center was revealed. Other pageant winners in the area boycotted the parade due to the ban.

A petition to remove Cummings from his position emerged over the weekend and had gained over 5,700 signatures by Tuesday morning. L’Insalata, however, doesn’t think this is the best move.

“A lot of people just want him totally removed, and the thing is, he was trying to shut me and the rest of the LGBTQ community out. He wasn’t trying to have a discussion,” she told NBC. “If I do the same thing, and if other people do the same thing by pushing him out, I don’t think that anything gets accomplished.”

See what others are saying: (CBS) (Washington Post) (NBC)