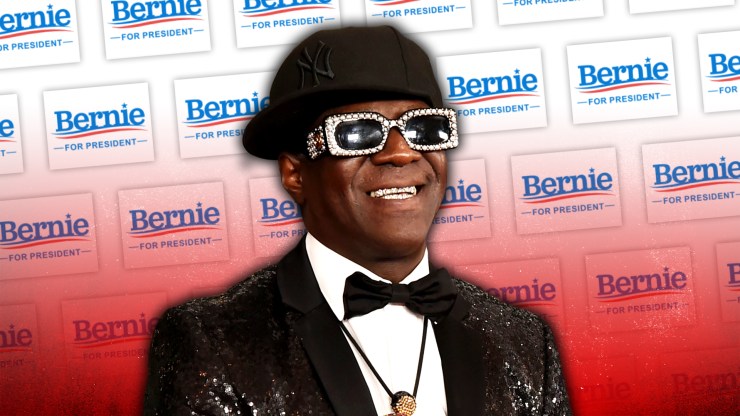 It almost goes without saying that the 2020 election has caused division in homes, families, and friend groups across the United States. Now, hip hop group Public Enemy has also fallen victim to this pattern, leading to the firing of member Flavor Flav.

Rolling Stone broke the news Sunday that Flavor Flav was no longer part of the group, after being a main player in it since its inception in 1985. The news came as fellow Public Enemy member Chuck D was set to take the stage at a Bernie Sanders rally in Los Angeles, a decision that did not sit well with Flavor Flav.

“Public Enemy and Public Enemy Radio will be moving forward without Flavor Flav. We thank him for his years of service and wish him well,” the group said in a statement to Rolling Stone.

This resulted in Flavor Flav hitting Sanders’ campaign with a cease and desist, alleging that promotion for the concert would mislead people to believe he would be attending as a Public Enemy member.  The letter claims the campaign used “the unauthorized use of his likeness, image and trademarked clock in promotional materials” for the rally.

Unlike Chuck D, who has been vocal about his support for Sanders, the letter states that Flavor Flav has not endorsed any candidate in 2020.

“While Chuck is certainly free to express his political views as he sees fit–his voice alone does not speak for Public Enemy,” the letter continued. “The planned performance will only be Chuck D of Public Enemy, it will not be a performance by Public Enemy…There is no Public Enemy without Flavor Flav.”

“Bernie, his name is Flavor Flav and he does NOT approve your message!” the last line of the letter says. It is signed by Flavor Flav’s lawyer, as well as Flavor Flav himself, who included a handwritten note saying, “Hey Bernie, don’t do this.”

“From a legal standpoint, Chuck could perform as Public Enemy if he ever wanted to; he is the sole owner of the Public Enemy trademark,” his legal team said in a statement to Rolling Stone. Chuck D also spoke to the outlet about his frustration himself.

“Flavor chooses to dance for his money and not do benevolent work like this,” Chuck D told the magazine.

Before Flavor Flav’s firing, Chuck D also sent out a series of tweets about the cease and desist letter. He claimed that some of his frustrations stem from Flavor Flav not showing support for Harry Belafonte’s group that fights social injustice after he inducted Public Enemy into the Rock and Roll Hall of Fame.

After performing at the rally, when news of Flavor Flav’s departure from Public Enemy had broken, Chuck D hopped back on Twitter. He said that Flavor Flav has a history of not agreeing to perform at benefit shows, and that had there have been a financial incentive to perform at the Sanders rally, Flavor Flav “would’ve been there front & center.”

As Chuck D mentioned, this is not the only legal battle he and Flavor Flav have been a part of.  In 2017, Flavor Flav sued Chuck D and his management company over alleged unpaid profits. The suit was dismissed in 2019, but some think it could be what Chuck D was alluding to in his tweets.

In addition to Chuck D’s frustrations with Flavor Flav’s unwillingness to do non-profit kind of work, many have turned to potential political divides between the two. Public Enemy as a group has been known to get political, but Chuck D, in particular, has been very open and active about his political beliefs. In 2017 Chuck D wrote an op-ed for the Daily Beast in 2017 called “Why Donald Trump Is a White Supremacist.”

At SXSW in 2016, he said, “Fuck Donald Trump” on stage. At that same event, Flavor Flav posed a voice of dissent.

“There’s a lot of people talking a lot of shit about Trump, but guess what? He’s winning,” Flavor Flav told Billboard. “The man is winning. I ain’t gonna lie, but listen, the United States has been ran a certain way for decades and decades and decades. You never know: Maybe Trump could possibly do something. Maybe he might step in office and do something. I’m not going to doubt him.”

The news of Flavor Flav being kicked out of Public Enemy caused a stir online, with many noting that it felt like a politically charged situation.

Flavor Flav has not commented on the matter yet. According to Rolling Stone, Public Enemy Radio will be releasing a new album in April.

See what others are saying: (Esquire) (Daily Beast) (The Hollywood Reporter)

Disney May Have Halted Lizzie McGuire Reboot Over Adult Themes