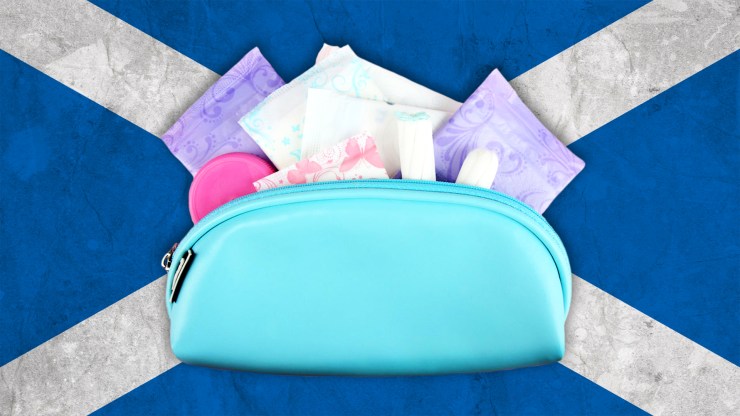 Scotland is on its way to becoming the first country in the world to offer female hygiene products for free.

A bill was passed in Scottish parliament on Tuesday that would make tampons and pads universally available for no charge in public places like community centers, youth clubs, and pharmacies. The plan was approved with 112 votes in favor, none against, and one abstention.

The Period Products (Free Provision) Scotland Bill was introduced by lawmaker Monica Lennon. During the debate on the bill prior to the vote, she said its passage would be a “milestone moment for normalizing menstruation in Scotland and sending out that real signal to people in this country about how seriously parliament takes gender equality.”

Next, the bill will move on to the second stage, where legislators can propose amendments. The plan is estimated to cost the government 24.1 million pounds per year ($31.2 million), and some lawmakers think this will be an obstacle in the process of signing the bill into law.

In addition to providing free resources for those who need them across the nation, the legislation also aims to reduce the taboo around menstruation across all genders. This was reflected in the extensive two-hour debate on the bill.

“I think that’s one of the things that this bill has done, is broken down that barrier for people to talk about these issues without embarrassment or stigma,” Neil Findlay, a member of parliament, said on the floor Tuesday. “And that is a very good thing.”

“It was fantastic to see members of my own union—I see some of them in the gallery, male industrial workers from Unite the union — out there campaigning on period poverty,” Findlay said. “That is absolutely fantastic. And long may that continue.”

This is not Scotland’s first move to combat “period poverty,” or the lack of access to menstrual hygiene products due to financial constraints. A 2018 survey of just over 2,000 people found that about one in four students struggled to access sanitary products.

Shortly after this survey, the Scottish government allocated funds to make period products freely available in schools, colleges, and universities.

This effort was expanded upon the following year when the government made these products available for free in more public places like libraries and recreational centers.

The impact of “period poverty” is widespread. Currently, sanitary products in the United Kingdom are still taxed at 5% in accordance with European Union regulations that consider them as a “luxury.” As a result of the recent Brexit transition, it will now be up to the U.K. government to set the tax rate, according to BBC. Meanwhile, the E.U. has pledged to drop all sales taxes on menstruation products by 2022.

See what others are saying: (Washington Post) (Vox) (NPR)