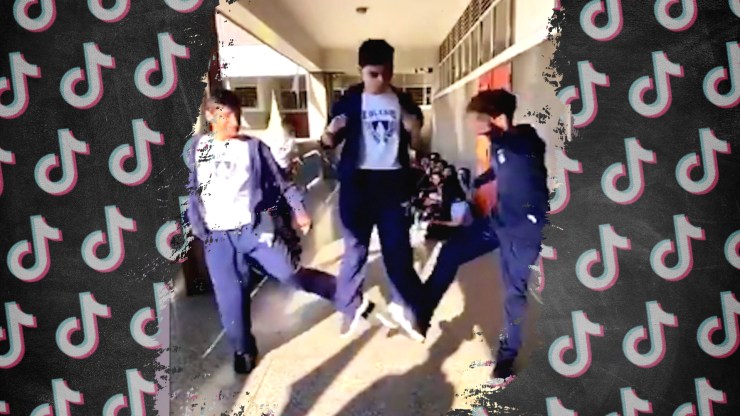 A new trend is making its rounds on the popular app Tik Tok— one that has led to serious injuries and received backlash from concerned parents.

The “skull breaker” challenge involves three people standing in a line, shoulder to shoulder, under the pretense that all of them will jump into the air at the same time. But instead, only the middle person jumps while the two people flanking them kick their legs out from under them, causing them to slam into the ground. In most cases it appears that the middle person is tricked into the challenge, unaware that they will be knocked over.

The danger of the “skull breaker” challenge can be found in its name, as it quite literally has the potential to crack people’s heads open. Doctors are warning that it can result in broken bones, concussions, and brain bleeding, among other injuries.

Tik Tok has expressed their disapproval of the challenge. The app told ABC News that the safety of their users is a top priority and they “do not allow content that encourages or replicates dangerous challenges that might lead to injury.”

This new online fad is the latest dangerous trend among young people, akin to the Tide Pod challenge and the viral Tik Tok “outlet challenge” that prompted warnings from fire officials. A Brazilian teenager reportedly died from the “skull breaker” challenge, and more youth around the world have been seriously hurt.

According to the Daytona Beach News Journal, the video has since been deleted. The News Journal reported that the victim’s parents were originally going to let the school handle it but ultimately decided to press charges. The Daytona Beach Police Department told TODAY that two students are facing misdemeanor charges of battery and cyberbullying as a result of the prank.

On Feb. 8, an Arizona woman posted images of her injured son to Facebook, reporting a head injury as well as stitches and cuts to his face that stemmed from the skull breaker challenge.

“My son was asked to do a jumping contest with his 2 ‘friends,’ when he jumped up, the 2 boys kicked him, as hard as they could, so his legs flew out in front of him,” Valerie Hodson wrote. “He landed hard flat on his back and head, as he struggled to get up he lost consciousness, he fell forward landing on his face.”

“I really contemplated posting this, but I feel there needs to be awareness of this malicious cruel viral prank,” Hodson said.

Hodson’s son is not the only child to be hospitalized due to the skull breaker challenge. Teri Smith, a woman located in Alabama, also took to Facebook to discuss her son’s broken bones after falling victim to the prank.

Similar pushes for awareness have been seen as impacts of the challenge have been felt by others around the country. In Portland, Oregon, 14-year-old Olivia Ross said she hit her head hard on the ground after she was tricked into the challenge by two seniors at her high school.

“They just told me we were going to jump for a video. Of course I was excited since they were upperclassmen and they were asking me to be in their video,” Ross told KOIN 6. “But I didn’t know what was going to happen.”

Ross and her mother, Lindsay Zobrist, decided the best course of action was to spread awareness of these types of viral pranks because they expect that many kids don’t know how dangerous they can be. They created a non-profit organization called Teaching Kindness Matters and are working to get school districts to include “pranking” in their definition of bullying.

The School-To-Prison Pipeline Debate: SROs & Why Student Arrests Are Increasing…