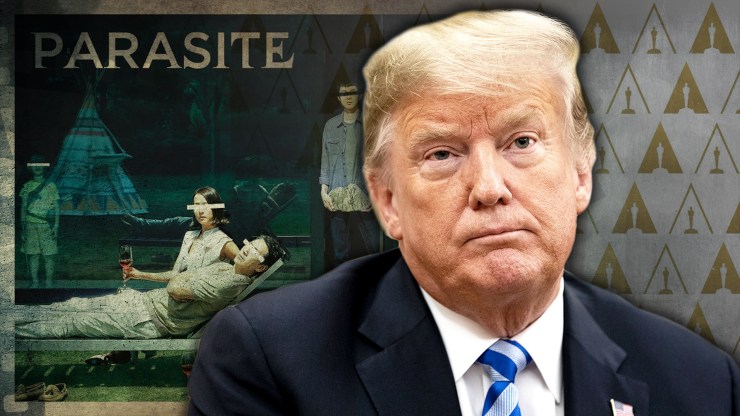 At a rally in Colorado on Thursday, President Donald Trump took a dig at the 2020 Oscars for awarding Best Picture to the South Korean film “Parasite.”

“By the way, how bad were the Academy Awards this year?” Trump asked the crowd in Colorado Springs, who responded with boos.

“And the winner is a movie from South Korea, what the hell was that all about?” Trump asked. “We got enough problems with South Korea with trade. On top of it, they give them the best movie of the year.”

Despite his criticisms, Trump went on to imply that he didn’t even watch the film.

“Parasite” made history earlier this month when it became the first film in a non-English language to win the Academy Award for Best Picture. On top of that, the movie took home awards for Best Original Screenplay, Best International Language Film, and Best Director—Bong Joon Ho.

These accomplishments didn’t seem to impress the president. Instead, he called for movies like “Gone With the Wind” and “Sunset Boulevard” to return. Both films feature white stars and were directed by white men.

Released in 1939, “Gone With the Wind” centers around a plantation-owning family in 1861. Accounting for inflation, it still holds the record for the highest-grossing film in U.S. history. But in recent years, the film has largely gone from a revered American classic to a piece of work examined and criticized for its romanticism of slavery.

Also at Thursday’s rally, Trump slammed Brad Pitt, who made a joke about the president’s impeachment trial during his Oscars acceptance speech for Best Supporting Actor.

“They told me I only have 45 seconds up here, which is 45 seconds more than the Senate gave John Bolton this week,” Pitt said at the awards show on Feb. 9.

The “Once Upon A Time in…Hollywood” star was referring to the former national security advisor who had not been allowed to testify in the impeachment trial.

The president’s critiques of the Academy Awards did not go unnoticed. Though “Parasite” is in Korean, it’s accompanied by English subtitles. Neon, the film’s U.S. distributor, responded to Trump’s remarks in a biting tweet.

“Understandable, he can’t read,” the company said in their reactions to Trump’s dislike of the movie.

Neon added the hashtag #Bong2020 in reference to the film’s director.

The Democratic National Committee also weighed in, adding their own diss to the president.

“Parasite is a foreign movie about how oblivious the ultra-rich are about the struggles of the working class, and it requires two hours of reading subtitles. Of course Trump hates it.”

Other Twitter users chimed in with similar messages condemning the president.

“Anyway parasite is still the best movie of the year Trump’s racist ass can cry about it,” one person said.

See what others are saying: (NBC) (Washington Post) (The Hill)