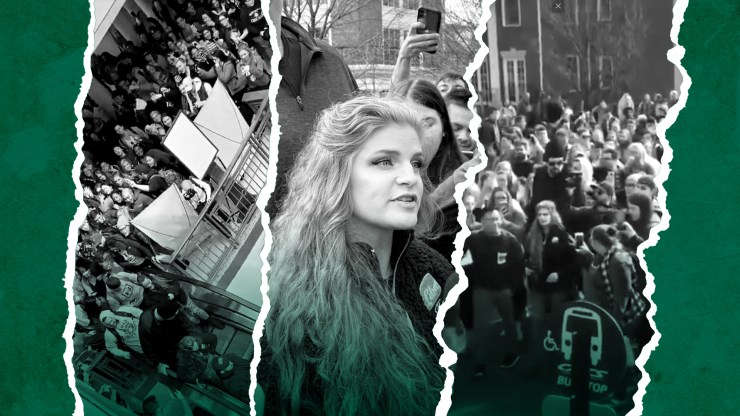 Kaitlin Bennet, known to many on the Internet as the Kent State Gun Girl, was met by crowds of student protesters on Monday when she arrived at Ohio University’s campus.

Bennett, a well-known conservative gun-rights activist, came to the school with the intent to film a video asking students trivia questions about President’s Day. In protest of her presence at the school, students chanted for her to leave and threw toilet paper at her.

Since her graduation photos depicting her holding a rifle on Kent State University’s campus went viral in 2018, Bennett has been a contentious figure online. She currently makes videos for Liberty Hangout, a controversial Libertarian media outlet. In them, she asks people on the street about hot-button issues like abortion, gender-inclusive bathrooms, and gun rights. With the viral attention these videos often receive also comes criticism and mockery from Twitter users.

Videos shared online of her arrival at Ohio University show students yelling things like “no one likes you” and “where’s your diaper.” The latter is a reference to a likely false online rumor that Bennett once soiled herself at a party.

Many students surrounded Bennett, phones in hand, as she made her way through the school. Bennett posted a video that she took from the inside of a car as she was leaving. In it, students are throwing liquids at the vehicle and blocking it from moving.

“This is what happens when a Trump supporter goes to a college campus,” she wrote before accusing the students of starting a riot, and suggesting that President Donald Trump revoke public funding from the school.

According to a statement from Ohio University’s Police Department, no arrests were made and no one was asked to leave the scene aside from moving people to clear public paths. They wrote that Bennett “engaged in Constitutionally protected activity.”

“She drew a large crowd of people, many with opposing viewpoints, who also chose to exercise their first amendment rights,” the statement added.

According to the statement, Bennett did not notify them of her visit. While this is not mandatory, they say it would have helped their staffing levels. The police also rejected her claim that a “riot” took place.

“Contrary to allegations circulating on social media, the incident did not rise to the level of a riot,” the school’s police wrote. “There was strong language, and allegations of some unknown person[s] in the crowd splashed water, but there were no reported injuries or violence and no one was arrested during the event.”

Bennett, however, was not pleased with the police’s response and claimed hot coffee was dumped on her and that her colleague’s car was vandalized.

She vowed to return to the school at a later date with “an army of gun owners for an open carry walk through campus.”

On Tuesday, she claimed there were high-level credible threats against her.

The incident sparked a large conversation online, with some appalled by the behavior of the protesters at Ohio University. One alumnus said it made them “sick.”

Blaze TV correspondent Elijah Schaffer said fighting against people who disagree with you politically is not the answer.

Conservative actor and producer James Woods called it a display of mob mentality from Democrats.

Some also encouraged Bennett to still raise her voice, even if people were standing against her.

On the other side, some thought these protests were exactly what Bennett expected and perhaps even hoped for. One Ohio University student told Athens News that it felt like Bennett “just came here to get this reaction.”

One Twitter user said that “this is the attention [Bennett] ordered.”

Others pointed to her past transphobic and homophobic comments, as well as controversial stances made in the past by Liberty Hangout. They believed these ideas should be met with dissent.

Others believed that it was hypocritical for conservatives to be upset that Bennett was being bullied because Trump is accused of bullying on a regular basis.

Bennett trended on Twitter Tuesday morning, with many posting memes and jokes about the situation. Some responded to this trend by noting that while they do not see eye to eye with Bennett, attacking her only fuels the fire for her.

Others thought something should be done about the tweets making fun of her, as it could be seen as a violation of Twitter’s policy.

Bennett’s name was still a top trending topic by Tuesday afternoon. She has not announced a specific date for her potential return to the Ohio school.

See what others are saying: (Athens News) (USA Today) (Cleveland.com)

88-Year-Old Crossing Guard Saves Children From Being Hit by Car, Dies a Hero