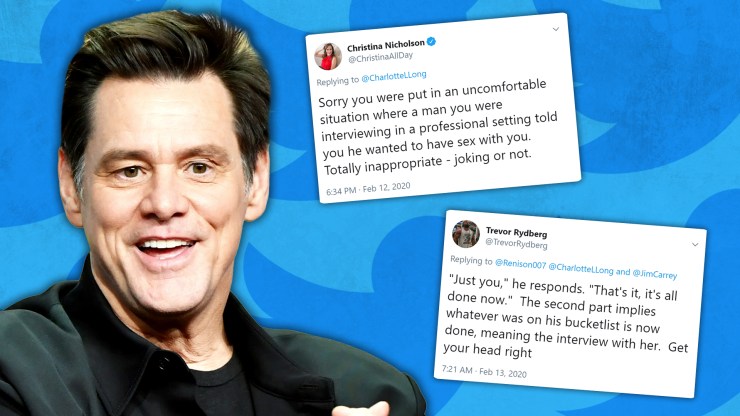 Jim Carrey is facing backlash over a remark he made to a female journalist that many found inappropriate, but fans are quickly coming to the actor’s defense online.

Reporter Charlotte Long, from UK’s Heat magazine, sat down with the 58-year-old comedian during a press junket for his new animated film, “Sonic the Hedgehog.”

During her interview, Long asks Carrey,  “In the film, Sonic has a bucket list. I was wondering, after all you’ve done in your career and in your life, is there anything still left on your bucket list?”

“That’s it. It’s all done now,” Carrey says to which Long replies with, “I don’t know what to say to that.”

Long moves forward with her other questions as the pair laughs off the moment. But when she later posted the interview on Twitter, many were shocked and upset by Carrey’s remark, which they interpreted as a sexual comment.

“Lost respect for him today. This is really unacceptable,” one Twitter user said before applauding Long for how she handled it.

Others called his comment “totally inappropriate” and labeled him a “massive sleazebag.”

But many of the comedian’s fans jumped to his defense. “He made a joke, joke didn’t land. Everyone is so offended about everything. If a female comedian said that about someone we’d all laugh. The hypocrisy is ridiculous,” one Twitter user said.

“Cue all the heroes acting offended fr the poor woman who was clearly NOT offended.” another added.

Cue all the heroes acting offended for the poor woman who was clearly NOT offended.

Meanwhile, others suggested that his comment is being completely misinterpreted. Instead, many feel Carrey was referencing the interview itself as his final bucket list achievement.

“Just you,” he responds. “That’s it, it’s all done now.” The second part implies whatever was on his bucketlist is now done, meaning the interview with her. Get your head right

He didn’t insinuate sex, he said he was done with his bucket list. It was an off the cuff remark. People need to relax. If anything he made it seem like it was the interview on his bucket list. He was trying to be nice. Relax everyone.

This was a joke made about him being mentally present. Not focusing on what he wants to do later but only focusing on what’s happening in the current moment. Anyone who closely follows his career knows exactly what that meant

Long eventually changed her Twitter account to private and neither she nor Carrey have commented on the backlash.

See what others are saying: (Insider) (Fox News) (EOnline)

Universal Moves Forward With “The Hunt” After Controversy: How the Conservative Rednecks vs. Liberal Elites Movie Is Rebranding Itself