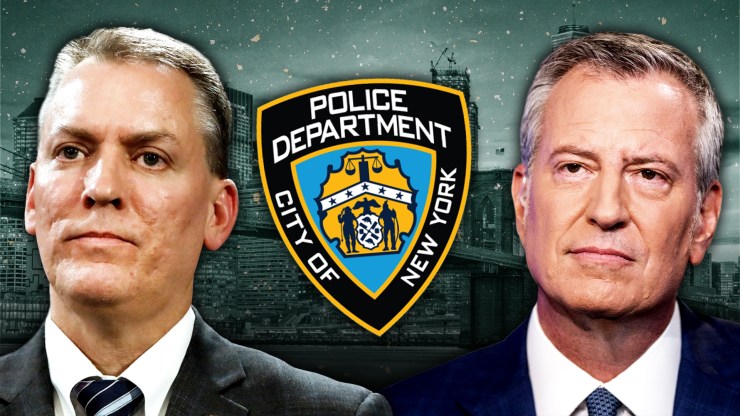 Two New York Police Department officers were shot in separate “assassination” attempts over the weekend by the same gunman, who told officials that he committed the crime because he hates cops.

“This is not a crime gone bad. This is not a liquor store robbery interrupted, that a tragedy erupts from. This is a premeditated assassination attempt,” Shea said.

Shea linked the violence to criticism of police, particularly recent protests against increased police presence on the subway.

“These things are not unrelated. We’ve had people marching through the streets of New York City recently,” he said on Sunday.

On Saturday night, a gunman walked up to two on-duty officers in a police van and opened fire. One of the officials, Paul Stroffolino, was shot in the neck and chin area. The officers drove off without returning fire. Stroffolino received medical attention and was released from the hospital on Sunday.

Just a few hours after the first attack, a gunman opened fire on officers in the NYPD’s 41st Precinct station house. One officer, Lt. Jose Gautreaux, was shot in the arm.

The gunman surrendered once he ran out of bullets, according to Commissioner Shea, and was taken into custody. Shea said that the suspect had served time in prison until 2017 after being convicted of attempted murder in 2002. On Monday, he was formally charged again, this time with 14 counts of attempted murder.

De Blasio called the shootings “an attack on all New Yorkers” and emphasized the need for peace and respect. He also tied the violence to the public backlash against law enforcement, saying that people who express hatred toward police are “aiding and abetting this kind of atmosphere.”

New York Gov. Andrew Cuomo said on Sunday that he was “horrified” by the multiple attacks.

“NY’s law enforcement officers put their lives on the line every day to keep us safe. These attacks are heinous,” he tweeted. “Those responsible will be brought to justice & held accountable to the fullest extent of the law.”

President Donald Trump spoke out about the incidents as well, asserting that de Blasio and Cuomo, who are both Democrats, were partly to blame for the committed crimes.

“I grew up in New York City and, over many years, got to watch how GREAT NYC’s “Finest” are,” Trump tweeted. “Now, because of weak leadership at Governor & Mayor… our wonderful NYC police are under assault. Stop this now!”

De Blasio responded to Trump’s tweet, saying this is “no time for division.”

“Our city is hurting right now,” the mayor said. “The only appropriate response is thoughts, prayers and solidarity with our officers.”

Edward Mullins, the president of the Sergeants Benevolent Association whose members consist of active and retired NYPD sergeants, agreed with the president. He went even further by saying NYPD members are “declaring war” on de Blasio, a move that has been condemned by elected officials from both major parties.

“Mayor DeBlasio, the members of the NYPD are declaring war on you,” the SBA wrote on Twitter. “We do not respect you, DO NOT visit us in hospitals. You sold the NYPD to the vile creatures, the 1% who hate cops but vote for you. NYPD cops have been assassinated because of you. This isn’t over, Game on!”

Furthermore, some criminal justice activists resisted de Blasio and Shea’s claims that demonstrations were connected to the attack against the officers.

Robert Gangi, head of the Police Reform Organizing Project, told USA Today that the officials’ accusations were “irresponsible,” particularly because the police haven’t linked the gunman to the protests in any way.

Gangi stood behind the protests in response to a tweet from de Blasio about the first shooting incident.

The transit protests are organized in part by Decolonize This Place, a group that pushes for the removal of police from the transit system, among other things.

“Linking the right to protest and to take direct action with unassociated and random acts of violence is a well-worn and gratuitous tactic long used by authorities to suppress dissident speech,” DTP said in a statement. “The Mayor, at least, should pretend to know better.”

Editor’s Note: At Rogue Rocket, we make it a point to not include the names and pictures of mass murderers or suspected murderers who may have been seeking attention or infamy. Therefore, we will not be linking to other sources, as they may contain these details.