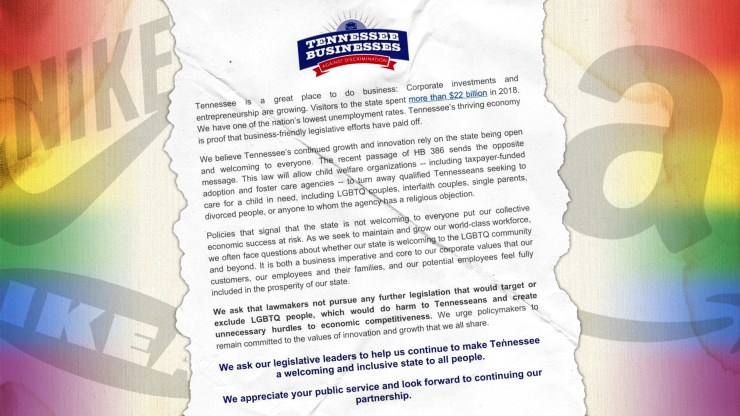 Over 140 businesses openly announced their opposition to Tennessee’s recent wave of passed and proposed anti-LGBTQ legislation in letter released Wednesday.

The group dubbed itself the Tennessee Businesses Against Discrimination and includes big names like Dell, Amazon, Hilton, Nike, and Ikea. Dozens of small businesses across the state signed as well.

The letter, which was organized by the Nashville LGBT Chamber of Commerce, points to HB 836, a newly-enacted adoption law that allows for discrimination against LGBT couples and individuals.

“We believe Tennessee’s continued growth and innovation rely on the state being open and welcoming to everyone,” the businesses said. “The recent passage of HB 836 sends the opposite message.”

Gov. Bill Lee signed the adoption bill last month, putting it into effect immediately. In their letter, the collective of companies warned that discriminatory policies like these “put our collective economic success at risk.”

“We ask that lawmakers not pursue any further legislation that would target or exclude LGBTQ people, which would do harm to Tennesseans and create unnecessary hurdles to economic competitiveness,” they wrote.

“It is both a business imperative and core to our corporate values that our customers, our employees and their families, and our potential employees feel fully included in the prosperity of our state,” the businesses added.

In addition to the shared message, a handful of businesses added their own personal messages. Postmates wrote that they continue to be “alarmed” by the anti-LGBTQ agenda of Gov. Lee. They threatened to cancel their plans to expand their workforce in Nashville, according to a report by the Associated Press.

“To our Postmates fleet, our customers, our small business owners, our entire community: we stand with you no matter who you love or who you are, and we will not accept this kind of flagrant hatred,” the company wrote.

Many have noted the absence of one company’s name from the letter— FedEx, the biggest company headquartered in Tennessee.

FedEx gave a statement to multiple news outlets on the matter, saying that while they’re frequently asked to join advocacy efforts, they “prefer to demonstrate their values through civic and charitable relationships that [they] support.”

“FedEx is as diverse as the world we serve, and we strive to provide an inclusive workplace in which all team members feel safe and respected,” the company added.

Some were upset by FedEx’s failure to support the letter.

“As one of the largest companies headquartered in Tennessee, FedEx has an obligation to its LGBTQ employees in Tennessee and its customers nationwide to use its public voice and brand power to help stop these dangerous anti-LGBTQ bills,” GLAAD, an organization that fights for gay rights, told CNBC.

“With more than three dozen large corporations speaking out against the slate of legislation today, FedEx’s refusal to address is notable and out of step with other companies doing business in Tennessee,” GLAAD added.

See what others are saying: (CNBC) (Associated Press) (CNN)

The Fight Between DNA Testing Privacy and Criminal Investigations Explained