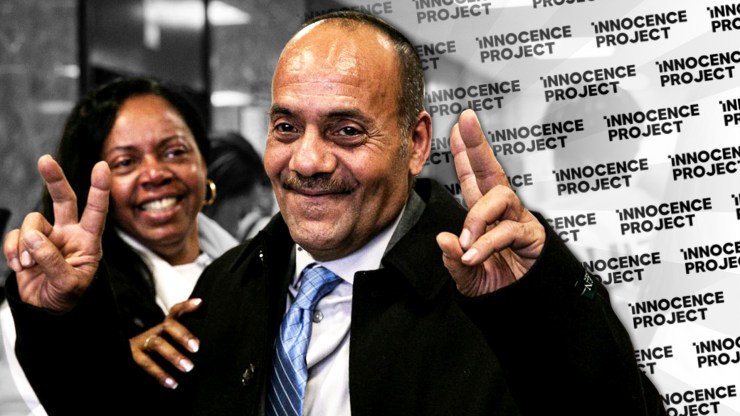 A wrongfully-convicted New York man who spent over two decades in prison was fully exonerated on Tuesday.

Rafael Ruiz, 60, was found guilty in a gang rape case in 1985. He was sentenced to a maximum of 25 years in prison, and ultimately served all of it. Though he was released in 2009, Ruiz spent the last decade fighting to clear his name.

His efforts were rewarded this week when a judge formally exonerated him at a hearing in State Supreme Court in Manhattan.

“I have my freedom and now I can go on with my life,” Ruiz told the Innocence Project, the nonprofit organization that helped him through the legal process.

In 1984, a woman was sexually assaulted on a rooftop by three men in Manhattan, New York. Shortly after the attack, she pointed detectives to the apartment that she thought the men had come from.

The unit she identified was the home of Ruiz’s brother, who told the authorities that Ruiz had recently visited. The police tracked down Ruiz and brought him in for questioning later that night, according to the Innocence Project.

The victim picked out Ruiz’s photo from a picture line-up, identifying him as “Ronnie,” a name he never went by. Right afterward, the victim identified him again in a one-on-one identification through a one-way mirror, a method that has been criticized for being prone to error.

Ruiz was convicted in 1985 and was originally offered a guilty plea deal that would significantly shorten his time behind bars. But he turned down the deal, adamant about maintaining his innocence.

“I was a man who went to court and went to trial to prove his innocence, but I was treated like I was already guilty when I stepped in there,” Ruiz told the Innocence Project.

One of Ruiz’s attorneys with the Innocence Project, Seema Saifee, told ABC that Ruiz consistently maintained his innocence multiple times before a parole board over the years. Saifee said he only implicated himself one time in a desperate attempt to be released and see his mother, who was dying of cancer.

After Ruiz was incarcerated, he received legal help from an attorney named William M. Tendy, Jr. Years into working on the case, Tendy found another man who lived on the same floor of the apartment building where the woman was attacked. This individual fit the victim’s description of the attacker and his name was Ronnie.

After this discovery, Tendy contacted the Innocence Project to take Ruiz’s case. The Conviction Integrity Program of the New York County District Attorney’s Office also joined in on the investigation.

Efforts from the two teams uncovered the victim’s untested rape kit in 2019, and after his DNA samples did not match, Ruiz’s innocence was finally proven.

What’s Next for Ruiz

Ruiz’s exoneration brings a mixed swirl of emotions for him and his loved ones.

“Yesterday was an incredibly happy day for Rafael,” Saifee told the Washington Post after the judge’s order. “But at the same time, it’s remarkably devastating.”

Ruiz currently lives in the Bronx with his brother. For the past ten years, he has had a difficult time finding a job because he was listed as a felon. Even with a clear record, he expressed worry about what his next professional steps will be.

Regardless, Ruiz looks ahead with a hopeful attitude and has even found positives in the situation.

“I lost 25 years of my life because I insisted upon my innocence and rejected plea bargains. Today feels like a huge burden off my shoulders and I look forward to living a good life moving forward,”  Ruiz told the Innocence Project.

“I guess now I might be one of the cases or life stories in those law books that someone can use and hopefully it can help them out with their cases,” he added. “That makes me feel good because I would like to see [innocent] people who got accused of doing a crime not go back into the system or lose their families or loved ones.”

The Innocence Project set up a link to Ruiz’s Amazon Wish List for those wishing to support him in some way.

See what others are saying: (ABC) (New York Times) (NBC)

Celebs Support Texas Teen Who Refused to Cut His Dreads

As Coronavirus Spreads, So Does Fear and Misinformation