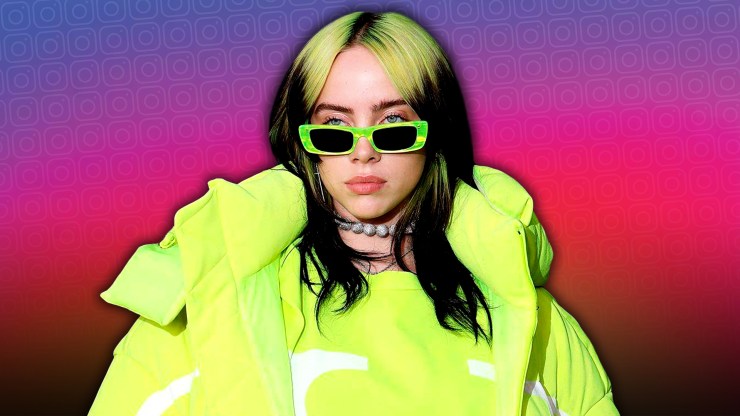 It’s safe to say that aside from her successful music career, the 18-year-old is also widely known for her unique fashion sense. The Grammy-Award-winning artist, currently rocking neon green roots, can typically be found wearing baggy clothes, chunky sneakers, long nails, and some funky sunglasses.

In fact, her style is so recognizable that she was even one of the most popular Halloween costumes of 2019. But some social media users have taken it a step beyond Halloween fun and have pretended to be Eilish in public for what they call “social experiments” or “pranks.”

In a recent Instagram Story, Eilish shared examples of these incidents, asking for people to put a stop to this behavior. “Please stop doing this shit,” she wrote above an image of an impersonator working for YouTuber and Photographer Jordan Matter.

“It’s not safe for you and it is mean to the people who don’t know any better,” she continued before saying, “you make me look bad.”

In two more posts, Eilish shared YouTube search results showing various videos of people impersonating her. In one post with over 2.4 million views, the impersonator, Lael Hansen, shut down a shopping mall after creating chaos with her presence. Throughout that video, Hansen even goes so far as to stop and pose for pictures with fans who are emotional and excited about meeting the supposed superstar.

One fan who thought she had seen the real singer later posted her own video: “I MET BILLIE EILISH AT THE MALL (SHE WAS SO RUDE)”

In Eilish’s last post addressing the issue, she zoomed in on the Jordan Matter-hired impersonator’s legs, writing: “also soooo disrespectful that you’d go out pretending to be me wearing THIS😂😂”

Fan accounts figured out that the impersonator Eilish called out was filming a video with Matter based on other images and videos he shared to his Instagram. Supporters then began to slam the photographer for the stunt across social media.

After Eilish’s post, Matter issued a statement on Instagram addressing the issue, saying, “I gathered a crowd and had an acrobat pretending to be Billie do a huge cheer flip, which revealed it was not Billie. I had absolutely no intention of disrespecting Billie. I’m a big fan, like everyone else.”

“I’ve never done a celebrity impersonation video before, but they’re pretty common so I thought it would be fun to add my own acrobatic twist,” he continued. “I felt it was completely harmless since at no time in the video are we pretending that she is actually Billie.”

Matter went on to say that he reached out to the singer and her mother to apologize and will not post his video without their permission.

Hello everyone. You’ve been commenting on the video shoot I did yesterday, and I’d like to respond. I gathered a crowd and had an acrobat pretending to be Billie do a huge cheer flip, which revealed it was not Billie. I had absolutely no intention of disrespecting Billie. I’m a big fan, like everyone else. I’ve never done a celebrity impersonation video before, but they’re pretty common so I thought it would be fun to add my own acrobatic twist. I felt it was completely harmless since at no time in the video are we pretending that she is actually Billie. I have reached out directly to Billie and Maggie and apologized, and I will not post the video without their permission. I hope this clarifies everything.

See what others are saying: (PopBuzz) (Insider) (The Daily Dot)