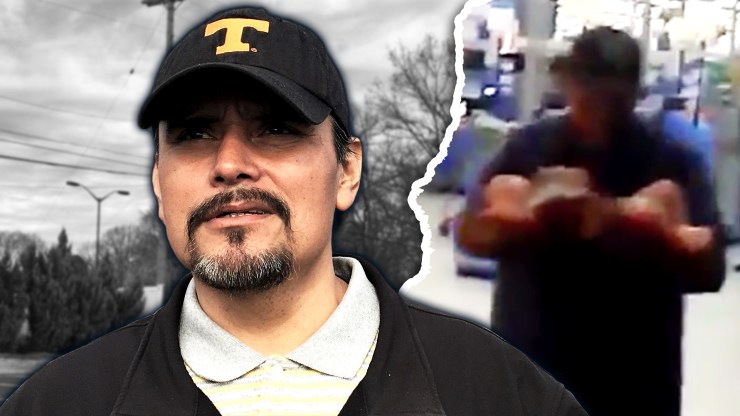 Shortly after the 2019 deadly mass shooting at a Walmart in El Paso, Texas, video footage came out of a mysterious man rescuing a baby from the tragic scene.

This week, after months of searching, El Paso police confirmed Lazaro Ponce as the hero. Sgt. Enrique Carrillo told the El Paso Times that FBI agents interviewed Ponce on Monday in Memphis to confirm his actions on the day of the shooting.

“We can confirm that’s the individual we are looking for,” Carrillo said.

“Not only did he remove the baby from among the dead bodies — it could have suffocated — he ran out and turned the baby over to emergency services personnel,” the official added.

Ponce is a 43-year-old transient day laborer who was living in a homeless encampment with his wife near the Walmart when it came under attack, according to the El Paso Times.

Less than two weeks after the shooting, the El Paso Police Department requested that the community help identify the man caught on cameras.

“His actions at Wal-Mart were critical and lifesaving, he needs to be identified and interviewed by investigators,” the department wrote in a tweet.

Ponce told the El Paso Times that he wasn’t aware authorities were looking to talk to him until recently. He and his wife had moved out of the area a few weeks after the shooting, so he hadn’t heard anything about the public call. In early January, after seeing an old El Paso Times headline about the saved baby and mysterious hero, Ponce reached out to the news outlet. After interviewing with the paper, he contacted the city’s police department and the FBI.

On Aug. 3, 2019, a gunman opened fire on citizens in a Walmart parking lot and then continued his rampage inside the store, ultimately killing 22 innocent people and injuring dozens more.

Ponce told the El Paso Times that he and his wife, Crystal Ann Roberts, were at Walmart when the violence broke out. After exiting through the back doors, Ponce went back inside the store and saw the baby with his mother, who was still barely alive at that time. Ponce said he tried to help the woman but she couldn’t move. He told her he would take the child outside to safety in case the shooter came back.

Both the baby’s parents, Jordan and Andre Anchondo, were killed in the attack. Their last action was to shield their infant, who survived thanks to their protection and Ponce’s deeds.

Once he took the baby to emergency services, Ponce said he went back inside the store to help others who were injured.

“He ran back into the store and with a shopping cart went to the towel section and went around treating the wounded and applying pressure,” El Paso Police Sgt. Carrillo said.

Even before Ponce came forward, he was praised for his selflessness. The baby’s grandfather, Gilbert Anchondo, expressed his gratitude for Ponce months ago before he was named.

“It was something heroic what he did and forever I will appreciate what he did, there are no word[s] to describe his kindness,” Anchondo told KVIA ABC-7.

Anchondo added that he hoped the mystery man would come forward “because I would like to thank him in person, hug him and tell him that he’s a very special person in my life because he pulled my grandson out of there.”

Ponce’s wife set up a GoFundMe after he came forward to the El Paso Times, citing “medical illness” as the need behind the fundraiser. The page has a goal of $50,000; as of Thursday morning, over $3,400 had been donated.

“God bless you for your heroic actions during a horrific tragedy,” one person wrote alongside their donation.

As Coronavirus Spreads, So Does Fear and Misinformation