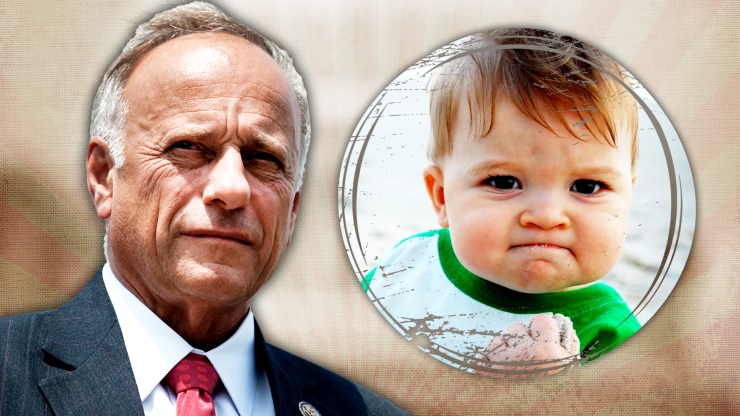 King Hit With Cease and Desist

The mother of the child pictured in the viral “Success Kid” meme hit Rep. Steve King (R-IA) with a cease and desist after he used the copyrighted photo in a fundraising ad without permission.

According to The Washington Post and BuzzFeed News, the letter was sent to King on Monday. He used the photo in an ad linked on his Facebook page, where he frequently posts right-leaning memes making fun of Democrats. The meme featured a photo that has been dubbed as “Success Kid,” where 11-month-old Sam Griner is making a tiny fist pump with a hand full of sand. Text over the picture read “FUND OUR MEMES!!!”

“QUESTION: Do you enjoy our memes??” The post reads. “If so, please click the link below and throw us a few dollars to make sure the memes keep flowing and the Lefties stay triggered. Thank you!”

The link went out to a WinRed fundraising page, which also included the photo. While in public office, King has repeatedly been criticized for making racist and white nationalist comments, as well as offensive comments about immigration and rape. Prominent fellow Republicans, like Liz Cheney, have condemned him for some of his remarks.

Mother Reacts to King’s Use of Photo

Laney Griner, Success Kid’s mom, first acknowledged the ad on Thursday after a Media Matters reporter shared it on Twitter.

“Just so it’s clear – I have/would never give permission for use of my son’s photo to promote any agenda of this vile man or that disgusting party,” Griner wrote.

On Monday, Griner shared a longer thread explaining why she was upset with the use of this photo, which she took in 2007 and copyrighted in 2012. She said that King’s use of it implied “that he has some kind of ownership in it.”

She said that Success Kid is about positivity and has no association with King. “I do not endorse Representative King and, like most people, I strongly disagree with his views,” she added.

Consistent with the demands of the letter, Griner stated that she wanted the meme removed from King’s webpages, a statement acknowledging that the photo was misused, and a refund of the money that the photo brought in. If King does not comply, Griner will sue.

Griner has previously made money from the use of her photo. Success Kid has been featured in a variety of ads, including a Coca-Cola Super Bowl commercial.

President Barack Obama also used the photo in 2013 after obtaining permission from Griner.

Griner spoke with the Post about King’s use of her image. She explained that she did not want the photo of her son, who is now 13, to be associated with anything negative, and King “is about as negative as you can get.”

“It’s just the antithesis of what the meme’s reputation is,” she told them.

She also explained that she is liberal and politics were a major factor in her reaction, but she would not rule out letting other Republicans use the photo.

King has removed the photo from his Facebook and it no longer appears on his WinRed page. According to the Post, he has not yet responded to Griner’s letter.

See what others are saying: (The Washington Post) (BuzzFeed News) (The Hollywood Reporter)