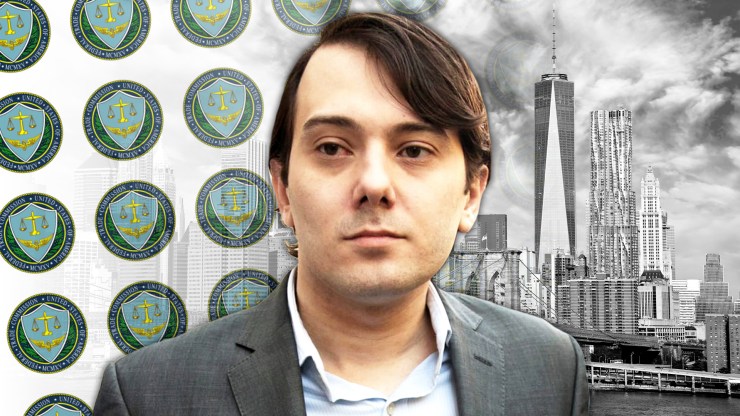 Martin Shkreli, an ex-pharmaceutical executive who is currently serving time in prison, was accused on Monday of using illegal tactics to maintain a monopoly on a lifesaving drug.

The Federal Trade Commission and New York’s attorney general, Letitia James, filed a lawsuit against Shkreli and his associate, Kevin Mulleady, with whom he owns Vyera Pharmaceuticals. The complaint, which was filed in federal court, challenges a “comprehensive scheme” conducted by the company and its heads to prevent generic versions of an anti-parasite drug from being made.

“We won’t allow ‘pharma bros’ to manipulate the market and line their pockets at the expense of vulnerable patients and the health care system,” James said in a statement.

Daraprim is a drug used to treat toxoplasmosis, a potentially fatal parasite infection. Shkreli made headlines in 2015 for spiking the price of Daraprim from less than $20 to $750 a pill, a move that brought him much backlash from around the nation. He’s often referred to by the media as “Pharma Bro” and “the most hated man in America.”

The FTC and James allege that Shkreli and associates dramatically bumped the price of Daraprim after buying the rights to it, knowing this move would attract generic competition. After hiking the cost, the pharmaceutical heads made efforts to block the generic reproduction of the drug by restricting access to samples and a critical ingredient, the suit claims.

It also accuses the defendants of signing agreements with Vyera’s distributors to prevent them from selling sales data about the drug to third-party data companies, a move that blocks critical information from competing companies to determine whether a generic version is worth pursuing.

“Their unlawful scheme to maintain a monopoly on Daraprim continues to this day,” the lawsuit alleges.

The suit demands an unspecified amount of funds from Shkreli and Mulleady to compensate those who overpaid for Daraprim due to their scheme. It also seeks that the men receive a lifetime ban from any further work in the pharmaceutical industry.

Shkreli has denied all claims.

“Mr. Shkreli looks forward to defeating this baseless and unprecedented attempt by the FTC to sue an individual for monopolizing a market,” Shkreli’s lawyer, Benjamin Brafman, said in a statement.

In 2018, Shkreli was sentenced to seven years in prison for unrelated fraud convictions tied to a different pharmaceutical company he founded in 2011 as well as two hedge funds that he ran.  Despite being behind bars, there were reports last spring that Shkreli still found ways to stay involved with Phoenixus AG, the parent company of Vyera Pharmaceuticals.

See what others are saying: (Time) (The New York Times) (Wall Street Journal)