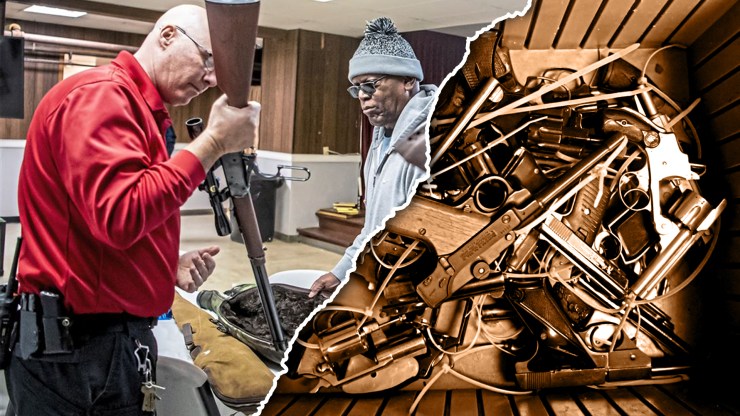 A gun buyback hosted by a church in Pittsburgh, Pennsylvania on Monday received such a large response from the community that they ran out of money within the first hour.

The Church of the Holy Cross ran the program in honor of Martin Luther King Jr., whose life and accomplishments were recognized in the form of a national holiday on Monday.

“In the first 45 minutes, we actually ran out of money,” Sylvia Wilson, the church’s senior warden, told CNN. “Some people were just bringing the guns in and they didn’t want the money. They just wanted to get the guns out of their homes.”

The church told CNN that $5,100 was raised by parishioners and other affiliate churches to buy back any firearms that people brought in. Individuals who participated received $50 or $100, depending on the type of gun. When the money ran out, the church posted a sign on their door.

“The Gun Buyback response has been overwhelming,” the sign read. “Thank you. We have run out of cash for this buyback. Sorry to turn so many away.”

“You can still turn in guns though,” the sign said at the bottom.

Wilson told CNN that even after the money had run out, people were coming to the church to turn in their guns. Other community members donated an additional $1,000 toward the buyback.

At least 146 guns were handed in overall, according to Rich Creehan, director of external relations for the Episcopal Diocese of Pittsburgh who spoke to CNN. Wilson said that the church was only expecting about 100.

The buyback program came just a few months after a double fatal shooting occurred right outside the Church of the Holy Cross.

“In early November, on this very corner where this church sits, there was a double homicide involving relatives who attended this church and participated in our summer program,” Dr. Leon Haley with the Church of the Holy Cross said at a press conference last week.

“And so having this gun buyback at this church, which sits in a community disproportionately affected by gun violence, is a statement of the moral and humanitarian values we espouse,” he added.

This incident, tied with the desire to honor Dr. King’s legacy of non-violence, is what prompted the church to hold the gun buyback.

On the same day, a very different event took place several hundred miles away. In Richmond, Virginia, thousands congregated for a rally and Lobby Day to fight for their gun rights.

“We didn’t realize that in Virginia they would be marching today,” Wilson told CNN, referencing the Richmond demonstration. “We see that as dishonoring his legacy because they’re marching on this holiday representing him. It’s the total opposite of what we’re trying to do today.”

The organizers of the Richmond gun rights demonstration emphasized that their assembly was intended to be peaceful. Although Gov. Ralph Northam preemptively declared a state of emergency in the Capitol grounds of Richmond in fear of violence, the rally took place without a hitch.

Amtrak Backs Down From $25,000 Quote for Group Traveling With Wheelchairs