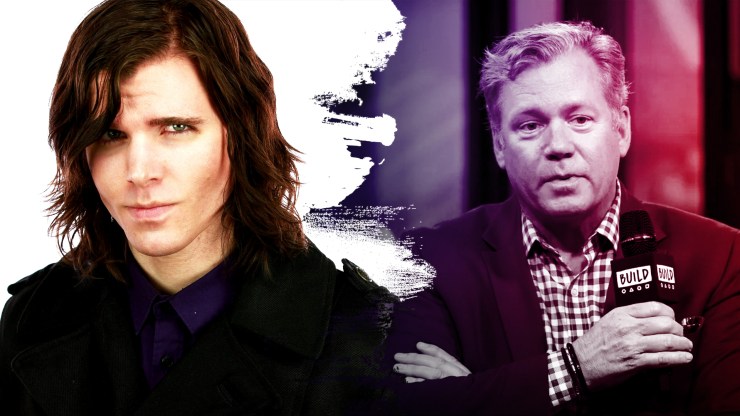 YouTuber Onision is filing a court personal protection order against journalist Chris Hansen, who has been covering the series of accusations of grooming and predatory behavior levied against him.

Hansen said in a video on Monday that Onision, who is also known as Greg or James Jackson, filed the order in Washington state. Jackson also filed the order against YouTuber Repzion, or Daniel Sulzbach, who has also posted several videos about the long-standing allegations.

Many have claimed that Jackson, along with his partner Kai, grooms young women, often minors who are fans of his, to become sexually intimate with him once they turn 18. Others have also brought up potential cases of other inappropriate, predatory behavior. Several girls have spoken to Hansen on his YouTube channel to explain their claims. Some have described a system of control and manipulation, such as a list of rules Jackson and Kai force the girls to follow.

Jackson has regularly denied the allegations. Rogue Rocket reached out to him to discuss them back in December. He asked for $10,000 in exchange for an interview.

Hansen Attempts to Reach Out to Onision

This was not the first time Hansen had attempted to reach Jackson to hear his side of the story. Hansen has claimed that he too was asked for monetary compensation in order to ask Jackson questions. On January 13, he posted a video of the 911 call Jackson made when he knocked on his door in an attempt at a face-to-face conversation.

In the call, Jackson refers to Hanson as an “internet stalker.” Hansen is seen standing outside of his door, knocking and sometimes speaking. He was accompanied by a camera crew and his attorney, Mike Morse. Police did arrive and no arrests were made.

In another video Hansen uploaded about his trip to speak with Jackson, he said that it appeared that Jackson was no stranger to officers.

“It quickly became clear that Greg was not unfamiliar to the local law enforcement authorities here,” Hansen explained to the camera in a video that has amassed over one million views.  “They were aware of his YouTube antics, the allegations of inappropriate contact with young women.”

He also added that Jackson declined to speak to him when given the opportunity, something Hansen noted was typical behavior in his experience investigating child predators.

Hansen confirmed the court order in a video week later.

In the video where Hansen explained the court order, he also gave a disturbing update he found in regards to Jackson and Kai’s children when working with police.

“We’ve now obtained Pierce County Sheriff’s reports about a 911 call in September of 2019,” Hansen said. “According to the transcripts, Onision and Kai’s young daughter fell from a second story bedroom window landing in the driveway.”

Hansen also added that this report notes that Jackson actually took a video of his young daughter in the driveway while she was injured, and panned up to the window that she fell from. As for the details of what happened, many have been sharing what appear to be screenshots of the records of the incident. Rogue Rocket requested the records, but has not received them yet, therefore we cannot confirm them. Some of the information in the screenshots shared does line up with what Hansen described in the video.

One screenshot came from Good Citizens Records, which said they obtained the police report. They redacted information to protect Jackson’s daughter and said that the accident was in fact an accident.

According to the screenshots, the police had previously done welfare checks at Jackson’s home and they had received calls about him “possibly sexually abusing young girls.”

As for why he recorded his child in the aftermath of the fall, Jackson said he wanted to be able to show the doctor what happened. According to the screenshots,  Jackson referenced an event in 2011 when a friend allegedly threatened to kill herself and make it look like he did it, and he wanted the video to show police he was not responsible. The report calls this explanation “strange.”

Another unconfirmed screenshot goes into the details of the accident and the injury obtained from it. It appears his daughter suffered from skull fractures as a result of the fall.

The fractures did not initially seem life-threatening, though that could rapidly change. Hansen said he will be covering more on this later in the week.

See what others are saying: (Newsweek) (Insider) (Mashable)