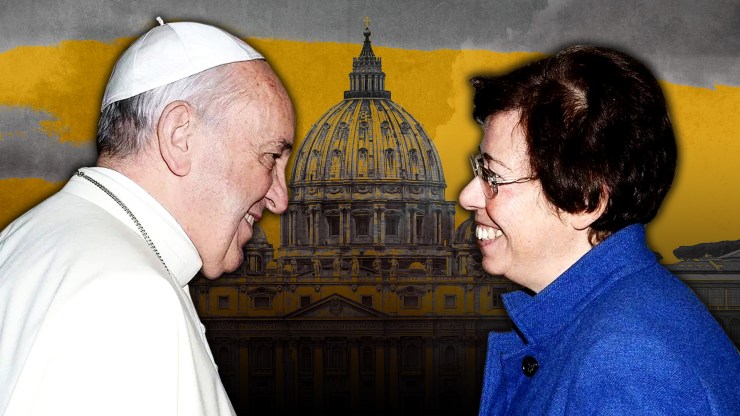 Pope Francis made an unprecedented move on Wednesday by appointing a woman for the first time to a managerial position in the Secretariat of State, the most powerful department of the Vatican.

Dr. Francesca Di Giovanni, an Italian lawyer and Vatican official of 27 years, was named the undersecretary for multilateral affairs in the Secretariat of State. Among other responsibilities, Di Giovanni will oversee a division that coordinates the Vatican’s relations with multilateral organizations, including the United Nations.

“The Holy Father has made an unprecedented decision, certainly, which, beyond myself personally, represents an indication of an attention towards women,” Di Giovanni told the Vatican’s in-house media.

“But the responsibility is connected to the job, rather than to the fact of being a woman,” she added.

Milestone for Women in Catholic Church

Several women hold leadership positions in other Vatican offices, but the Secretariat of State is the most powerful branch, making Di Giovanni’s career shift extra significant.

Pope Francis’ appointment of Di Giovanni is the latest development in his ongoing open support of women having more say in the Roman Catholic Church. Currently, women cannot be ordained as priests and the Church’s leadership is almost entirely male-dominated.

On New Year’s Day, the pope expressed praise for womankind.

“Women are givers and mediators of peace and should be fully included in decision-making processes,” Pope Francis said. “Because when women can share their gifts, the world finds itself more united, more peaceful. Hence, every step forward for women is a step forward for humanity as a whole.”

Di Giovanni referenced these words in her interview with the Vatican News calling them the pope’s “tribute” to the role of women.

“A woman may have certain aptitudes for finding commonalities, healing relationships with unity at heart,” Di Giovanni said. “I hope that my being a woman might reflect itself positively in this task, even if they are gifts that I certainly find in my male colleagues as well.”

See what others are saying: (Vatican News) (NPR) (BBC)

Protests Erupt in Iran After Military Admits to Shooting Down Plane 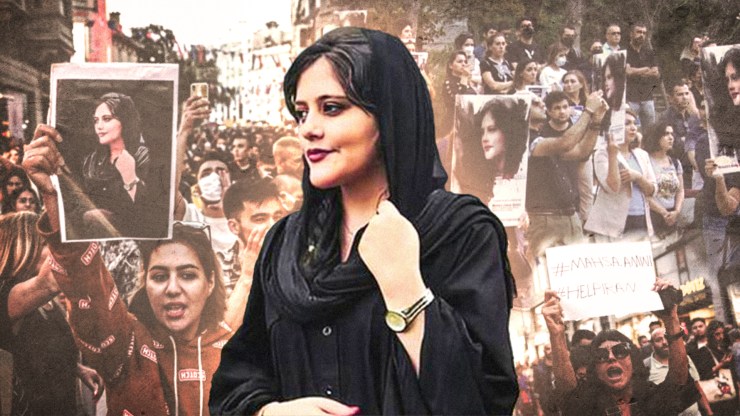 Anger initially directed at the police has now shifted to the Islamic regime itself, with Iranian-Americans protesting outside the U.N. Headquarters as their country’s president spoke inside.

Hijabs Go Up in Flames

Demonstrations spread from the capital Tehran to at least 80 other cities and towns, with videos on social media showing women burning their hijabs and cutting their hair in defiance.

In response, the government has gradually extended a virtual internet blackout across the country, blocking access to What’s App and Instagram.

To prevent protests from spreading, Iran’s biggest telecom operator largely shut down mobile internet access again Thursday, Netblocks, a group that monitors internet access, said in a statement, describing the restrictions as the most severe since 2019.

Clashes between police and protestors have killed some, but death toll reports on Thursday were conflicted. The Associated Press tallied at least nine people dead, while Iran’s state television put the number at 17, and a human rights group estimated at least 31 deaths.

The violence began on Saturday, shortly after the news that Amini had died the day prior in the hospital where she was comatose for three days.

Previously, the morality police arrested her for violating Islamic law requiring women to cover their hair with a head scarf and wear long, loose-fitting clothing.

Multiple reports and eyewitness accounts claimed that officers beat her in the head with batons and banged her head against one of their vehicles, but authorities have denied harming her, saying she suffered a “sudden heart failure.” Her father told BBC that she was in good health and that he had not been allowed to view her autopsy report.

“My son was with her. Some witnesses told my son she was beaten in the van and in the police station,” he said.

Surveillance footage was released showing Amini collapsing inside the hospital after grabbing her head, seemingly in pain.

From Anti-Hijab to Anti-Regime

Although the protests began in reaction to Amini’s death and Iran’s repressive policing, they quickly flowered into a mass opposition movement against the Islamic regime as men joined ranks of demonstrators and chants of “Death to the dictator!” broke out.

The anger was directed at the country’s Supreme Leader, Ayatollah Ali Khamenei, as well as President Ebrahim Raisi, who attended the United Nations General Assembly this week. Iranian-Americans rallied outside the U.N. Headquarters Wednesday to voice their discontent as Raisi addressed the assembly.

“The hijab is used as a weapon in Iran,” one woman told CBS in Los Angeles. “It is a weapon against the West, and women are used as pawns.”

“Let this be the George Flloyd moment of Iran,” she added.

There have also been demonstrations of solidarity in countries such as Lebanon, Germany, and Canada.

See what others are saying: (The New York Times) (Al Jazeera) (BBC) 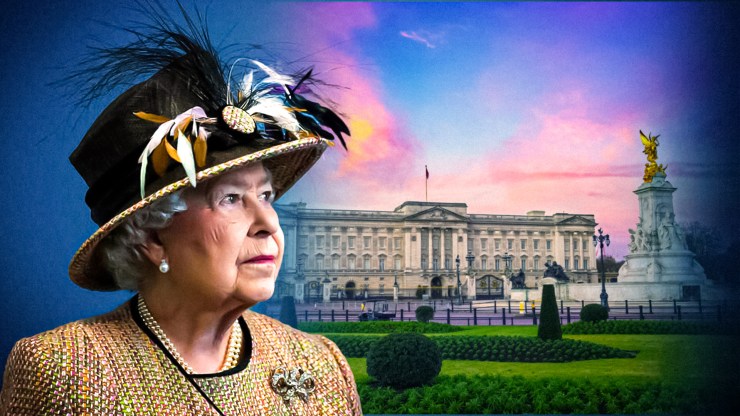 “I know her loss will be deeply felt throughout the country, the Realms and the Commonwealth, and by countless people around the world,” her eldest son and successor, King Charles III said.

The Passing of a Historic Monarch

Queen Elizabeth II, the longest reigning monarch in Britain’s history, passed away on Thursday afternoon, per an announcement from Buckingham Palace.

According to the Palace’s statement, The Queen “died peacefully” while at her Balmoral estate in Scotland. Reports say she was surrounded by family members, including her eldest son and successor, who announced in the hours after her passing that he will go by King Charles III. Several of her other children and grandchildren were also present.

Early on Thursday morning, Buckingham Palace announced that the Queen was under medical supervision as doctors were concerned for her health. Soon after, BBC One suspended its programming to focus on coverage of the Queen. Anchors donned black attire while other media outlets and royal circles began to prepare for the 96-year-old monarch’s passing.

The Queen took the throne at the age of 25 following the death of her father, King George VI. She served her tenure for 70 years, becoming not only the longest-serving monarch in the U.K., but also the second-longest serving monarch in world history.

As the world changed drastically over the course of those seven decades, the Queen became a symbol of reliability and security for many. During her reign, 15 Prime Ministers took office in the U.K. She met regularly with leaders both in the country and abroad.

“She is unlike any other monarch in our history – she’s our longest-lived, longest-serving, longest-reigning monarch,” royal biographer Robert Hardman told BBC News. “She just stands for this constancy, this sense of permanence and stability. And I think over the years people have probably taken her for granted often. Suddenly, at times like this, we all realise… how precious she is.”

According to the palace, King Charles III and his wife will remain in Scotland and return to London on Friday. Over the next ten days, the family will enter a period of grieving and succession.

“We mourn profoundly the passing of a cherished Sovereign and much-loved Mother,” The King said in a statement. “I know her loss will be deeply felt throughout the country, the Realms and the Commonwealth, and by countless people around the world.”

“During this period of mourning and change, my family and I will be comforted and sustained by our knowledge of the respect and deep affection in which the Queen was so widely held.” 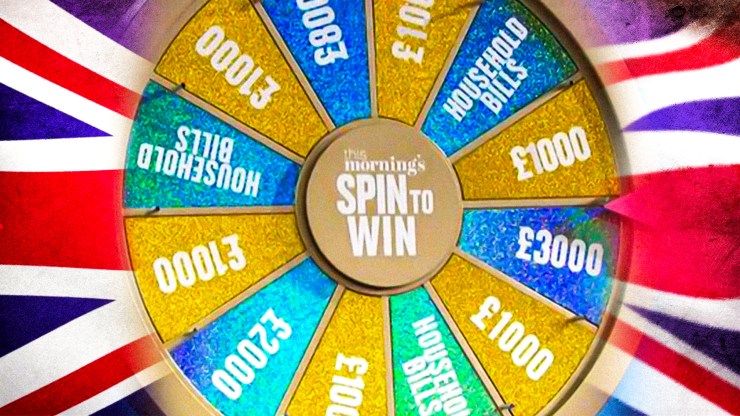 Round and Round It Goes

The internet has lampooned the popular British television show “This Morning” for its new segment, “Spin to Win,” in which contestants twirl a giant glittering wheel for a chance to win a cash prize or have their energy bills paid.

A clip of the show posted by TV critic Scott Bryan went viral on Twitter.

“#ThisMorning has turned completely dystopian and Black Mirror by offering to pay energy bills as a competition prize,” the post said. “Honestly I’ve never seen anything so tone deaf in all my life.”

In the video, host Phillip Schofield asks a contestant how worried he is about his energy bills.

“I’ve got one of these pre-payment meters and it’s absolutely murder,” the man responds.

“Round and round it goes. Where it stops, nobody knows,” Schofield said as he gave the wheel a spin.

When the spinner stopped, he shouted, “It’s your energy bill!”

“Oh my god, thank you,” the contestant said. His energy bills would be paid for four months.

Cost of Living Shoots Through the Roof

Many have called “Spin to Win” distasteful and insensitive because Britain is struggling through a cost-of-living crisis that has seen the price of basic necessities pierce the stratosphere. Late last month, the Associated Press reported that millions of people are on track to pay around 80% more in energy bills by October.

The same day, Britain’s energy regulator announced a price cap of £3,549 per year for heat and electricity.

The rising cost of utilities is driven by Russia’s invasion of Ukraine, the pandemic’s aftermath, and high inflation, among other factors.

“The Brits are trying to cope with the energy crisis,” said host Olga Skabeeva on Moscow’s state-owned Russia-1 channel this week, pointing to This Morning’s Spin to Win segment as evidence of the U.K.’s hardship. “I repeat, this is happening in Britain.”

On Thursday, new British Prime Minister Liz Truss announced a new £2,500 cap on energy bills for typical households over the next two years.

In the scheme, the government will cover the difference between the wholesale price energy firms pay for gas and electricity and the retail price they charge customers.

Truss refused to put a price tag on the measure, but it could cost up to 150 billion pounds, according to the BBC.

The cap will also affect businesses for six months.

See what others are saying: (The Washington Post) (Business Insider) (BBC)