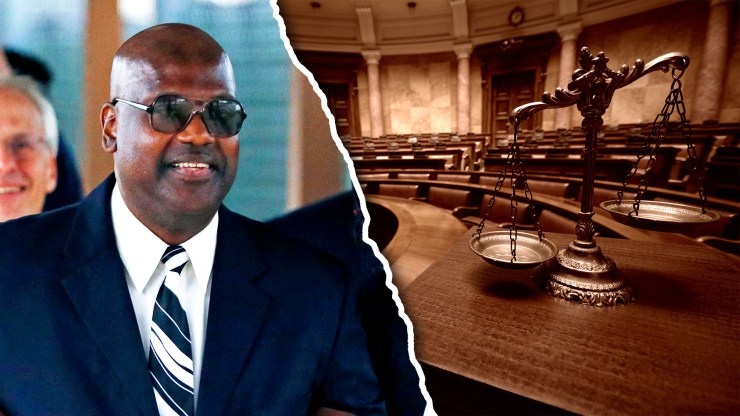 Curtis Flowers, a Mississippi man who has been tried six times for the same murders, was granted bond by a judge on Monday that allows him to await the next step of his case at home with his family instead of in custody.

“He’s extremely happy to be out,” Flowers attorney Rob McDuff told The Washington Post. “I think he had a sense that this was going to work out this time around.”

The decision came as a huge victory for Flowers, who has spent almost 23 years behind bars after being indicted with the killing of four furniture store employees in 1996. His case has gained national attention as four of his convictions have been overturned due to concern over racially-charged unconstitutional prosecution.

“This has been a long and costly process, and there is no need to continue wasting taxpayer money on this misguided prosecution that has been plagued by misconduct and racial discrimination,” McDuff added.

Doug Evans, who has been the prosecutor in all six trials, has been questioned after reporters from American Public Media thoroughly examined evidence in the case suggesting underlying racist influence.

In a trial process, prosecutors and defense attorneys can use “peremptory strikes” to remove people from the jury with no explanation. The APM reporters found that from 1992-2017, Evans’s office struck 50% of the eligible black jurors and only 11% of white jurors.

The two trials of Flowers that resulted in hung juries were also the only two trials that had more than one black person assessing his guilt.

Flowers’ most recent trial was in 2010 and resulted in a death sentence. His attorneys argued that Evans’s process of gauging potential jurors was skewed with racism. In the 2010 trial, Evans asked 145 questions of the black potential jurors he rejected, while he made a total of 12 inquiries to the 11 white jurors he seated.

In June of this year, the U.S. Supreme Court examined the constitutional validity of the 2010 death sentence ruling —primarily, if Evans’s jury decisions were or were not racially discriminating. The high court determined that they were and reversed Flowers’ murder conviction.

Supreme Court Justice Brett Kavanaugh wrote that the effort to strike down black jury members “strongly suggests that the state wanted to try Flowers before a jury with as few black jurors as possible, and ideally before an all-white jury.”

After the most recent murder conviction was overturned, Evans stood by his belief that Flowers committed the crime.

“There’s no question about [Flowers’] guilt,” he told American Public Media. “There never has been.”

When discussing the Supreme Court’s ruling that he tried to exclude black jurors from the trials, Evan flatly denied the claim.

“If they said that, that is not true,” he said.

Last month, the NAACP Legal Defense and Education Fund filed a lawsuit against Evans accusing him of racial discrimination.

Next Steps for Flowers

Although Flowers is granted permission to go home for now, he is not yet entirely free. His legal team filed a motion in September to drop the charges, but they are still waiting for that ruling.

McDuff says he expects the judge to hold a hearing regarding dropping the case early next year. Flowers will have to wear an electronic monitor while his case continues.

See what others are saying: (NPR) (USA Today) (The Washington Post)