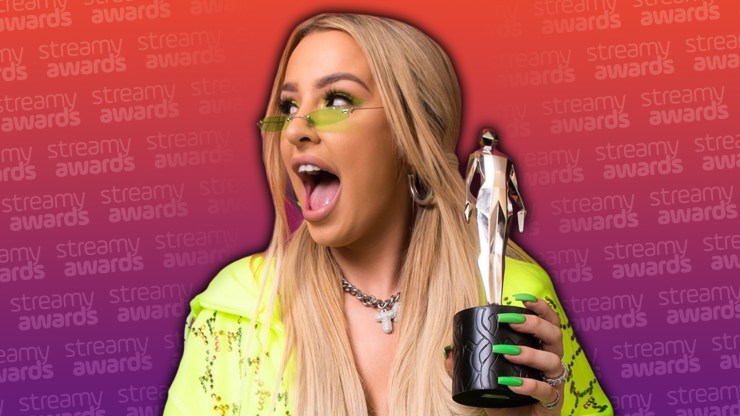 YouTuber Tana Mongeau took home the coveted “Creator of the Year” award at Friday night’s Streamy’s ceremony to the surprise of many internet users and even Mongeau herself.

“I don’t want to make a big deal out of this but it is not, it is not Davik Dobrik,”  fellow YouTuber Casey Neistat said before announcing the winner.

“I’m sorry David, but you’ve won like every award tonight. It’s only fair,” Neitstat said to Dobrik, who had already picked up three Streamys for best First Person, Ensemble Cast (The Vlog Squad), and Collaboration (for a video with Kylie Jenner.)

“Give it to Tana,” Dobrik said before Neitstant confirmed that she was indeed the winner.

Just one year ago, Mongeau accepted the honor on behalf of Shane Dawson, who received widespread praise for his multi-part docuseries “The Truth About Tanacon,” Mongeau’s failed convention that hoped to rival Vidcon.

“I think we can all agree this is the only time I’ll ever be holding a ‘Creator of the Year’ award,” she said at last year’s ceremony.

Mongeau used this year’s full circle moment to thank Dawson. “I really just want to say thank you to the only people who saved my life and got me here and that is my fans and Shane Dawson.”

“I never thought this would happen,” she added. “Here’s to all the people who don’t feel like ‘Creator of the Year,” she said while raising her Streamy in the air.

Though Mongeau was met with cheers and applause at the ceremony, many internet users appeared to be upset by the news.

While some were surprised that Dobrik did not take home the award, others felt the Streamy should have gone to MrBeast, who has recently made headlines for his massive campaign to plant 20 million trees around the globe.

Popular drama YouTuber Peter Monn tweeted, “Mr Beast starts a project to plant 20,000,000 trees to help save the environment. Tana Mongeau has a failed MTV series & gets fake married and wins Creator of the Year. The Streamys are an absolute joke.”

Ethan Klien, of h3h3 productions, tweeted and deleted a sarcastic congratulatory post to Mongeau. “Thank you for being outrageously yourself and a positive role model for young people everywhere,” he wrote alongside two photos to suggest that Mongeau heavily edits her social media photos.

Klien used the same side by side photos in a controversial video he made earlier this year about faking perfection online. “Well deserved!” he added in another post before removing the comparison photo.

But the most common question people had about Mongeau’s win was: “How?”

It’s not too surprising that many were outraged by Mongeau receiving the Streamy since she has been criticized as a bad influence on children and faced backlash over Tanacon, using the n-word, and charging her subscribers to watch the live steam of her wedding with Jake Paul, among other controversies.

However, many also noted that “Creator of the Year’ falls under the Audience Choice category, meaning that the award is fan-voted.

Many of her fans came to her defense online against those who felt she was undeserving.

“I wouldn’t discredit your favorite creator if they were the one that won, so please STOP discrediting mine & the rest of the fans that voted for tana,” one user tweeted.

i wouldn’t discredit your favorite creator if they were the one that won, so please STOP discrediting mine & the rest of the fans that voted for tana.

it was fan voted after all…. we fuckin tweeted & retweeted #VoteTana til we couldn’t anymore & would do it again.

“@tanamongeau won because us, her fans, whose lives SHE impacted, voted for her. If you’re mad ur fav didn’t win why didn’t you vote? Stop saying she didn’t deserve to win when she won fair and square,” another wrote.

Retweets and stand-alone tweets with a creator’s hashtag counted as votes for the category. According to Insider, Mongeau heavily campaigned for herself, unlike her competitors. If you look at the Streamy’s tweets for the nominees, posts for Mongeau have far more engagement in comparison to her competition.

For instance, a post for Mongeau gathered over 2,000 retweets, while a similar one for MrBeast earned just over 100.