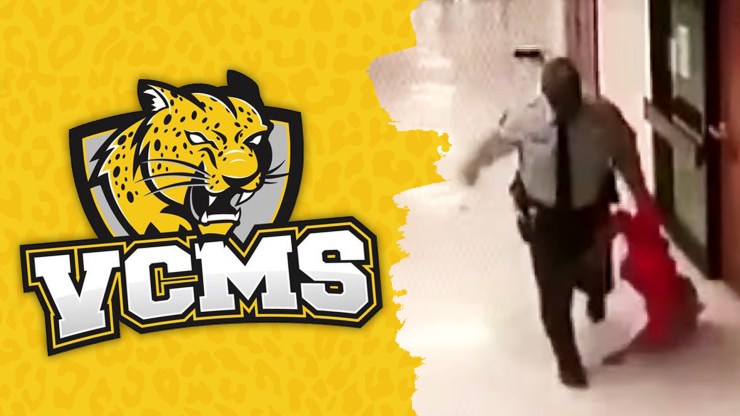 UPDATE: The deputy has been named as Warren Durham. He was fired from the sheriff’s office on Monday. On Tuesday, Durham was charged with assault, child abuse, and willful failure to discharge. All of the charges are misdemeanors.

A North Carolina sheriff’s deputy was suspended after video footage revealed him body-slamming a student two times before dragging him across the floor.

The incident occurred on Thursday at Vance County Middle School in Henderson, N.C. Neither the deputy nor the student’s identities have been released, but authorities have confirmed that the student was under 12 years of age. The child’s mother reported that he has a bump on his head but was not hospitalized.

The State Bureau of Investigation is looking into the incident to determine if criminal charges are warranted. County Sheriff Curtis R. Brame called in the investigation.

“I was stunned, I was shocked,” Brame told local news station WRAL. “Seeing a child that small reminded me of one of my grandchildren.”

It is unclear what prompted the violent actions of the deputy, who has been placed on paid leave. He served as a school resource officer and was escorting the student to the school’s administration office, according to The New York Times.

Video shows the deputy stopping mid-walk to pick up the student, throw him to the floor, and repeat the same action. He then picks the student up a third time to drag him down the hallway.

District Attorney Michael Waters called it “disturbing” and a “use of force case.”

“I’ve been able to assure the family that this [investigation] is being conducted appropriately,” he told WRAL.

Brame said he has no knowledge of any past issues with the deputy in the two years that he has been working for the sheriff’s office.

Vance County Middle School released a statement regarding the episode, obtained by WRAL.

“We are deeply concerned by the actions that took place,” the statement read. “School and district officials are working closely and in full cooperation with the local authorities to address this matter consistent with school board policy and state laws. The safety of our students has been and continues to be of the utmost importance to our district.”

The school directed any further questions to the Vance County Sheriff’s Office.

Emma Williams, a grandmother of another student at the middle school, was upset by what happened.

“Regardless of how a kid acts, what a kid says… that’s a grown man,” Williams said. “And the job you have, you got to have standards.”

She told WRAL that she was concerned that she learned of the event on social media instead of from the school directly.

The video footage of the incident has also brought in a slew of online reactions demanding harsher punishment for the deputy.

WTF!! Outrageous. Paid leave??? This guy should be locked up asap. Unreal, a double body slam on this small kid, and he’s on paid leave – lock him up. What if there was no video? Pathetic.

See what others are saying: (The New York Times) (NBC) (The Washington Times)