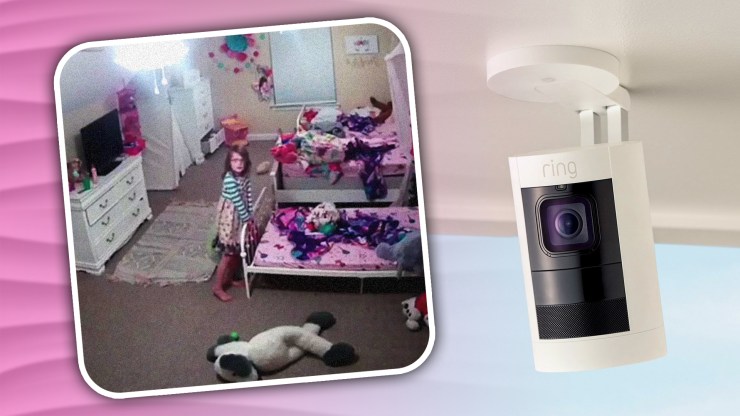 A hacker tapped into a Mississippi family’s home security camera last week and used the speaker feature to talk to an 8-year-old girl.

The video footage shows the child, Alyssa LeMay, walking into her bedroom after hearing eerie music from inside. Blaring from the camera’s speaker is Tiny Tim’s rendition of “Tiptoe Through the Tulips,” a song that was famously featured in the horror movie “Insidious.”

As Alyssa paces around trying to identify the source of the noise, the music stops and a voice comes from the camera, pushing her to say the n-word.

She repeatedly asks out loud who is talking to her.

At one point the hacker also tries to coax Alyssa to destroy her room, telling her, “You can do whatever you want right now. You can mess up your room. You can break your TV.”

The little girl screams for her mother, who was out of the house at the time running an errand. Her father was home and rushed to the room to unplug the camera.

Ashley LeMay, Alyssa’s mother, was horrified when she saw what happened. The 27-year-old had bought a pair of Ring cameras to install in the bedrooms of her four children, per a fellow mother’s recommendation.

Ring’s indoor cameras have elevated features intended for security, including night-vision and a two-way talk system. LeMay made the purchase on Black Friday, hoping to help her children feel safe as she works overnight shifts in a hospital.

The camera initially was a positive asset to the home, but just a few days after its installation, on Dec. 4, that sense of safety was abruptly violated.

“I did the exact opposite of adding another security measure,” LeMay told The Washington Post on Thursday. “I put them at risk and there’s nothing I can do to really ease their mind. I can’t tell them I know who it is. I can’t tell them that they’re not going to show up at our house in the middle of the night.”

When asked about the incident, Ring released a statement to WMC5, claiming that the hack wasn’t a result of a breach in their security system but rather it happened because two-factor authorization was not set up by the family.

“Due to the fact that customers often use the same username and password for their various accounts and subscriptions, bad actors often re-use credentials stolen or leaked from one service on other services,” the company said. “As a precaution, we highly and openly encourage all Ring users to enable two-factor authentication on their Ring account, add Shared Users (instead of sharing login credentials), use strong passwords, and regularly change their passwords.”

LeMay felt frustrated by Ring’s lack of answers when she contacted them.

“To be honest, it felt like they were trying to place the blame on me,” she told The Washington Post. “As a mother, I already feel guilty enough that I let this happen to my family… There’s just no need for that.”

This is not the first time that Ring’s security cameras have been hacked into. There have been multiple reports of security breaches in the past few weeks, from Georgia to Florida to Texas.

Ring states that their mission is to “reduce crime in neighborhoods,” but the digital age has brought in new ways for hackers to virtually break into a home and cross lines.

“What’s so scary to us is that this person did not care that it was a young child,” LeMay said to The Washington Post.

Virginia Man Gifts $12,000 Worth of Toys to Low-Income Children