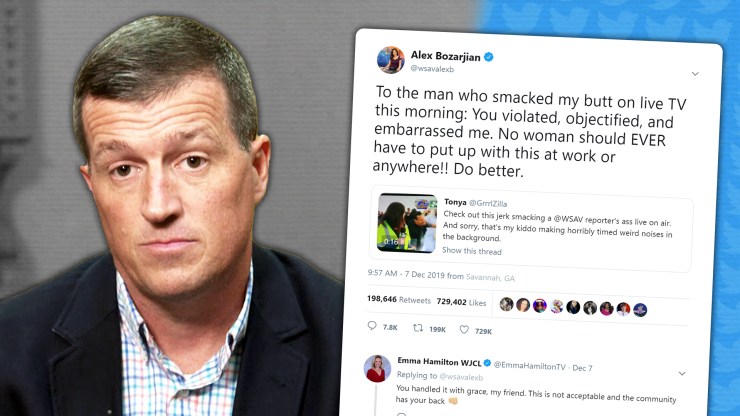 A runner who smacked a Georgia reporter’s behind during a live news segment spoke out on Tuesday in his first television appearance since the viral incident.

The smack happened Saturday when WSAV-TV reporter Alex Bozarjian was covering the annual Savannah Bridge Run. Several participants waved at the camera as they ran by during her segment, but one man decided to smack Bozarjian on her backside before sprinting away.

Bozarjian was visibly shocked by what happened as she tried to get back to her live report.

A Twitter user shared a clip of the incident that quickly went viral. Bozarjian eventually shared that post with her own statement, writing, “To the man who smacked my butt on live TV this morning: You violated, objectified, and embarrassed me. No woman should EVER have to put up with this at work or anywhere!! Do better.”

The incident sparked outrage from Twitter users who were disgusted by the behavior and received notable attention from fellow reporters.

Race officials were also quick to condemn the runner’s behaviors. The director of the Savannah Sports Council, Robert Wells, told Bozarjian the incident was “100% unacceptable” and said the organization would identify the man.

Alex, what happened today is 100% unacceptable. You have my assurance we will identify him.

The following day, the organization announced that it had banned the runner from registering for all of its future races.

News outlets and social media users later identified the runner as Tommy Callaway, a 43-year-old married father of two who is both a youth minister and boy scout leader, according to his Facebook and Linkedin profiles.

Callaway’s lawyer, Joseph Turner, released a statement on his behalf to WTOC Monday, saying his client is a “loving husband and father who is very active in his community.” He added that Callaway was “working with those involved to correct the situation.”

“While we regret the situation, Mr. Callaway did not act with any criminal intentions,” Turner said.

That same day, Callaway appeared on Inside Edition to further explain what happened. “I was getting ready to bring my hands up and wave to the camera, to the audience, and there was a misjudge in character and decision-making. I touched her back. I did not know exactly where I touched her,” he said.

Callaway added that he took the reporter’s words to heart. “I totally agree 100 percent with her statement and the two most important words were her last two words, ‘Do better,’ and that’s my intention.”

See what others are saying: (CBS News) (Inside Edition) (Heavy)