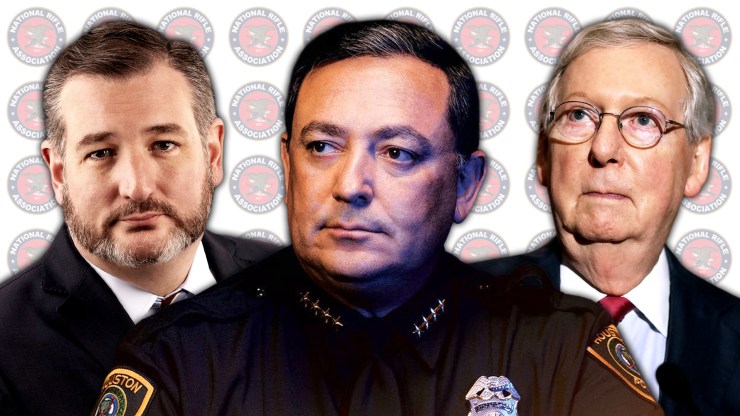 Houston Chief of Police Art Acevedo publicly denounced Republican senators on Monday for their failure to reauthorize the Violence Against Women Act and take action against gun violence.

Acevedo was standing outside of a medical examiner’s office when he spoke to the press, waiting to escort the body of Sgt. Christopher Brewster to a funeral home. Brewster was fatally shot after responding to a domestic violence call over the weekend.

The chief specifically called out Senate Majority Leader Mitch McConnell (R-KY) and Texas senators Ted Cruz and John Cornyn in his passionate remarks. He said he believes that one of the biggest reasons they won’t pass the VAWA is “because the NRA doesn’t like the fact that we want to take firearms out of the hands of boyfriends that abuse their girlfriends.”

“And who killed our sergeant?” he added. “A boyfriend abusing his girlfriend.”

The VAWA was originally enacted in 1994 to improve criminal justice and community-based responses to domestic violence, but it expired in February. The House passed a reauthorization of the bill in early April, but it is currently on hold in the Senate as some disapprove of new provisions like closing the “boyfriend loophole.”

Under the former version of the VAWA, only spouses and ex-spouses who are convicted of stalking offenses or domestic violence crimes are not legally allowed to buy firearms. Closing the “boyfriend loophole” would extend these gun restrictions to boyfriends and non-spousal partners.

The NRA has publicly criticized the provision to close the “boyfriend loophole” in the past, calling it a “poison pill” and “too broad and ripe for abuse.”

“You’re either here for women and children and our daughters and our sisters and our aunts,” Acevedo said on Monday. “Or you’re here for the NRA.”

Last week, before Brewster’s death, Acevedo had been part of the group of Houston leaders who urged Congress to reauthorize the VAWA.

In response to these requests, Sen. Cornyn blamed the ongoing impeachment hearings for distracting lawmakers from other matters.

Acevedo mentioned Cornyn’s online response in his call for action on Monday.

“And don’t tell me, Senator, with all due respect, it’s about the impeachment,” he said. “Because you brag every day, you and Mitch McConnell, about getting judges confirmed. You brag about every piece of legislation you care about.”

The suspect accused of killing Sgt. Brewster, Arturo Solis, already had a previous domestic violence conviction. A spokesperson for Cornyn told The Washington Post that Acevedo’s arguments to close the “boyfriend loophole” didn’t apply to this case because there are already laws that restrict people who have previously been convicted of domestic violence (although the federal gun control act still has its own ‘boyfriend loophole.’)

“So the ‘loophole’ he spent so much time blaming Sens. Cornyn and Cruz for didn’t apply because [Solis] already wasn’t supposed to own a gun,” Cornyn’s spokesperson said.

Cornyn’s office also told CNN that Democrats are to blame for the delay in reauthorizing the revised VAWA.

“Democrats in DC walked away from negotiations and that’s when it fell apart,” they said in an email.

In turn, Cruz’s office released the following statement to KHOU 11:

“For many years, Senator Cruz has worked in law enforcement, helping lead the fight to ensure that violent criminals—and especially sexual predators who target women and children—face the very strictest punishment,” they said. “Senator Cruz is currently reviewing Violence Against Women Act legislation in the Senate.”

See what others are saying: (Houston Chronicle) (Washington Post) (CNN)