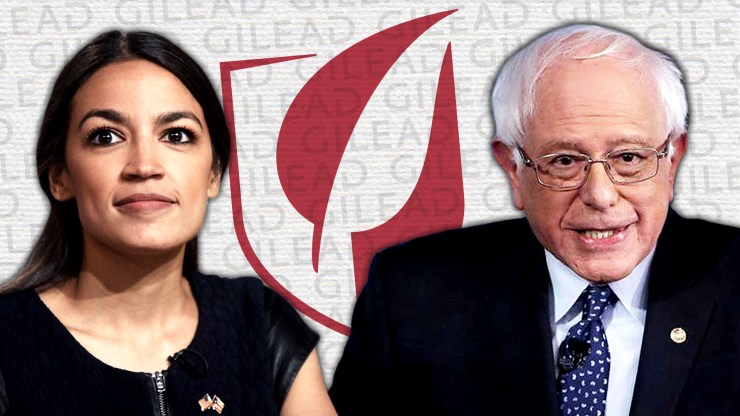 Rep. Alexandria Ocasio-Cortez (D-NY) and Sen. Bernie Sanders (I-VT) are calling on the Trump administration to reject a patent extension request from Gilead Sciences after the company was accused of delaying the development of a safer HIV prevention drug.

A petition filed by advocacy group PrEP4All Collaboration alleges that when Gilead suspended the development of a newer and potentially safer HIV prevention drug in 2005, it did so in order to maximize its monopoly on profits from its less-safe drug that was already on the market. The petition says they wanted to leave this old drug on the market until its patent expired, and before generic competition came up. The company did not submit the new drug, tenofovir alafenamide, or TAF, to the Food and Drug Administration until 2010. It was approved in 2015.

According to a report from the Washington Post, Gilead is currently requesting that its patent on TAF be extended for another three years. PrEP4All is asking the Patent and Trademark Office to reject this request because of this allegation.

TAF is meant to prevent HIV infections via a process called pre-exposure prophylaxis, also known as PrEP. Extending the patent would make sure they had a monopoly on the drug.

Letter from Sanders and Ocasio-Cortez

PrEP4All’s fight got a new push of support on Monday when Sanders and Ocasio-Cortez gave their support. In a letter to the U.S. Patent and Trademark Office obtained by The Guardian, the leaders condemned Gilead for these accusations.

“It is an absolute disgrace that in America, a greedy drug company like Gilead can deprive hundreds of thousands of Americans of lifesaving HIV medicine to extract more profit, lie about it, and then have the audacity to ask the US government to award it with a longer monopoly to reap tens of billions more in profits,” Sanders wrote.

Together, the two urged the Trump administration to “not reward Gilead for this immoral behavior.”

If the Trump administration followed their requests, it would not be the first time they took action against Gilead. In November, the administration sued the company in a patent infringement case. They accused the company of profiting off of taxpayer-funded research without giving taxpayer money back.

Statements From Those Involved

Ocasio-Cortez and Sanders have not been the only ones to speak out.

“Gilead has not only intentionally delayed clinical development of a drug to artificially manipulate its eligibility for a patent-term extension, but it has done so despite the apparent harm to patients,” said attorney Christopher Morten, who filed PrEP4All’s petition in a statement to the Washington Post.

The Post says that the petition cites statements made by the company’s executives in 2011, where some indicated a desire to “avoid cannibalizing sales of the old drug” with the expectation that TAF could maintain the patent longevity of their HIV drug franchise. The petition also says that Gilead stated that clinical trials had indicated that TAF is safer than older drugs. A study funded by them found that restricting patients from the new drug could cause 16,000 deaths over the course of nine years.

Still, the Washington Post said the outcome of PrEP4All’s petition is not set in stone.

“Odds of success are steep because the patent office will review such third-party petitions only in ‘extraordinary’ circumstances, according to its rules,” their report said.

“Patient safety is of foremost importance to us, and any implication that Gilead delayed the development of a drug known to be safer than [the older drug] is false,’’ Gilead spokesperson Ryan McKeel said in a statement obtained by the Post.

See what others were saying: (The Washington Post) (The Guardian) (The Advocate)