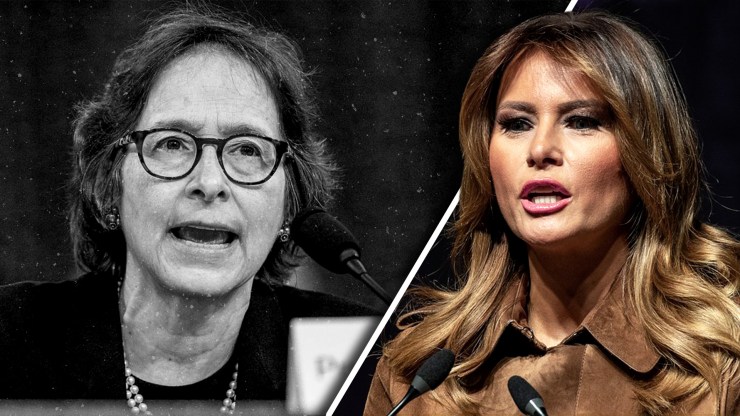 Pamela Karlan, a Stanford law professor, dropped a controversial joke while testifying in the ongoing impeachment hearing against President Donald Trump on Wednesday.

While explaining the difference between the POTUS and a king, she used a play on words with the name of his teenage son, Barron.

“The constitution says there can be no titles of nobility,” Karlan said. “So while the president can name his son Barron, he can’t make him a baron.”

Karlan’s joke received a scattering of laughter around the room, including a chuckle from Rep. Sheila Jackson Lee, who posed the question of how the president compares to royalty.

“A minor child deserves privacy and should be kept out of politics,” the first lady wrote. “Pamela Karlan, you should be ashamed of your very angry and obviously biased public pandering, and using a child to do it.”

Karlan was put on blast by other prominent figures for her mention of the president’s son. Vice President Mike Pence called her joke a “new low.”

Rep. Matt Gaetz, a Republican from Florida who strongly supports the president, chastised her directly on the floor Wednesday.

“Let me also suggest that when you invoke the President’s son’s name here, when you try to make a little joke out of referencing Barron Trump, that does not lend credibility to your argument,” he said. “It makes you look mean.”

The Trump campaign released an official statement on the topic.

“Only in the mind of crazed liberals is it funny to drag a 13-year-old into the impeachment nonsense,” National Press Secretary Kayleigh McEnany said.

Later in the day, Prof. Karlan apologized for her remarks, but not without mentioning that she wishes Donald Trump would also admit to his faults.

“I want to apologize for what I said earlier about the president’s son. It was wrong of me to do that,” she said during her testimony. “I wish the president would apologize obviously for the things that he’s done that’s wrong, but I do regret having said that.”

Defense of the Professor

While some were outraged by Karlan’s play on words, others spoke up to defend her, deeming the joke harmless.

It was NOT the minor child she was referencing.
It was INSTEAD the father’s delusions of royal grandeur in his naming of the child—the monarchical mindset & legacy the Framers were establishing specific guardrails against.

Barron you’re not the issue. Your dad’s the issue.

Some Twitter users criticized the FLOTUS for being quick to defend her own son but staying silent on her husband’s treatment of other minors, including teenage climate activist Greta Thunberg and migrant children experience inhumane treatment at the border.

Your husband attacked a 16 year old climate activist for her views on climate change. Your husband separates children from their parents at the border and locks them in cages. #BeBestMyAss #shutupmelania

Hey @FLOTUS nothing negative was said about your son, I watched every minute. If you are so concerned with minor children then why haven’t you done anything about #KidsInCages! This rule applies to all kids everywhere not just your son!

See what others are saying: (CNN) (NBC) (Newsweek)