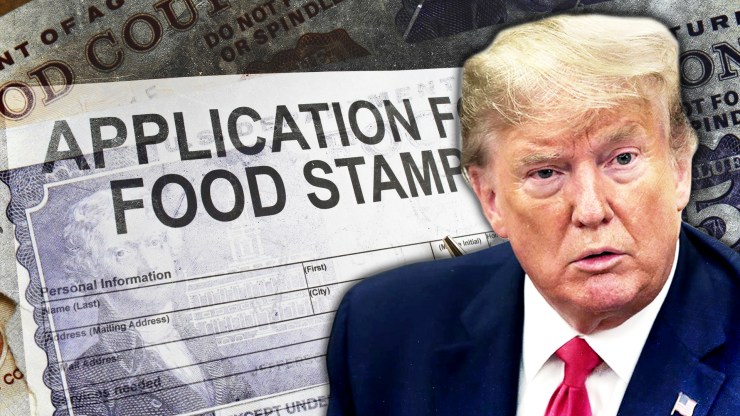 Trump administration finalized a new rule that could remove almost 700,000 people from the federal food stamp program. The rule, announced in a press release on Wednesday, creates stricter work requirements for the Supplemental Nutrition Assistance Program, or SNAP.

“The U.S. Department of Agriculture’s (USDA) final rule promotes work for able-bodied adults between the ages of 18 and 49 without dependents,” the press release said.

Under current regulations, this demographic can receive three months of SNAP benefits throughout a three year period, unless they work or undergo professional training for at least 20 hours a week.

States have had the ability to waive this time limit to account for economic turbulence, and counties with unemployment rates as low as 2.5% were eligible for these remissions. The new rule will make 6% the minimum unemployment rate to qualify for these waivers, according to the Washington Post.

While the USDA originally estimated that up to 750,000 people would be cut from SNAP with this change, now they have adjusted that number to 688,000.

The finalized regulation is the first of three proposed measures to limit access to the federal food stamp program. A new study by the Urban Institute found that if the other two rules are approved, nearly 4 million people would lose access to food benefits.

After the new rule was proposed in February, there was an abundance of public comments imploring the administration not to go through with it.

But the USDA was not swayed and held strong in their argument that SNAP should be a form of temporary assistance instead of a long-term lifestyle.

“Government can be a powerful force for good, but government dependency has never been the American dream,” said Sonny Perdue, Secretary of Agriculture. “We need to encourage people by giving them a helping hand but not allowing it to become an indefinitely giving hand.”

Those who support the rule are optimistic that it will push unemployed individuals to find jobs.

“The changes reflect the belief that more Americans can enter and reenter the workforce,” Brandon Lipps, the USDA’s Deputy Under Secretary, told the Washington Post. “So they can know the dignity of work.”

Critics of the change were extremely disappointed upon the news of the rule’s finalization, deeming it a step in the wrong direction.

“The Trump administration is driving the vulnerable into hunger just as the Christmas season approaches,” Senator Chuck Schumer, the Democratic leader, said on the floor Wednesday. “It is heartless. It is cruel. It exposes a deep and shameful cruelness and hypocrisy in this administration.”

Rep. Marcia L. Fudge, chairwoman of the House Agriculture Committee’s subcommittee on nutrition, released a press statement on Wednesday after hearing the news.

“The Administration refuses to take an honest look at the people they are targeting with this rule and what challenges they face that contribute to their hunger…” she said. “…Instead of considering hungry individuals and their unique struggles and needs, the Department has chosen to paint them with the broadest brush, demonizing them as lazy and undeserving.”

See what others are saying: (New York Times) (NPR) (NBC)